Last winter, deep in the midst of my constant “morning” (AKA all day) sickness, I was getting the same question over and over again:  “Are you ready to have a baby? Have you done everything you wanted to do?”.  Which is kind of a silly question, because life doesn’t end the moment you have a baby, so who cares if you still have stuff you want to do in your life?  But it did make me think about my never ending bucket list, and the number one thing at the top that I’d been looking forward to doing my entire life:  seeing the Grand Canyon.  I remember turning to my husband last winter in a panic and telling him that we absolutely had to go to the Grand Canyon before I had a baby. In February I had some extra days off work, so we somehow threw together a long weekend trip with only two weeks notice.  We knew it was going to be a crazy fast trip, but our plan was to go to Sedona for two days, the Grand Canyon for one day, and then Page for one day.  We were so excited for lots of hiking, warm dessert days, and a break from the snow!  I mean, what could go wrong?  As we started to pack for the trip, we noticed that there was snow in the forecast during the first part of our trip.  We kind of laughed it off, especially since I’d read that sometimes it snows in Sedona and the light dusting of snow makes everything even prettier.  So armed with our winter coats we flew down to Phoenix!

We got to Phoenix in time for a quick dinner before driving up to Sedona in the dark.  We woke up the next morning excited for sunshine and views of the red rocks, but it was snowing.  HARD.  In fact, over the next two days it snowed so much that it broke snowfall records!  On day one we were stuck in our bed and breakfast, leaving only to try to get to Whole Foods for some food before it closed due to terrible road conditions.  None of the restaurants or stores opened up as the blizzard got even worse.  On the second day of our trip, we managed to get out during a break in the snow to do some shopping at some of the limited stores that were open so that we felt like we were doing something on our vacation.  On top of all of the snow, I was feeling awful due to pregnancy and spent most of the time either napping and running to the bathroom to throw up.  It definitely wasn’t the warm, sunny vacation we’d hoped for!  In fact, all of the roads out of Sedona were closed for two days so we had to completely rearrange the rest of the trip.  The roads to the Grand Canyon were closed as well so it was easy to convince them to move our hotel reservation one day later.  After discussing our options, we realized that we were going to have to cancel our night in Page.  We decided that no matter what happened, we were going to get me to the Grand Canyon so I could cross it off my bucket list before having the baby!

Day three of the trip was finally sunny and clear.  After confirming that the roads out of town were open (and throwing up four times – yay pregnancy), we headed up north to finally see the Grand Canyon!  Our drive out of Sedona was absolutely gorgeous.  The snow was so deep that we couldn’t even pull over to take pictures, and I was so sad that we hadn’t been able to spend more time hiking and exploring Sedona.  I knew as we drove out of town that we absolutely had to come back again!

As we drove through Flagstaff, we tried to confirm that the roads to the Grand Canyon were officially open.  Yavapai Lodge, our hotel inside the park, told us that the entrance through Tusayan was closed, so we drove up Route 89 to get to the Grand Canyon through the back entrance instead.  But when we got to the turnoff to the park we found out that the entrance we were trying to get through was now closed, and the other entrance had just finally opened up.  It was going to be another two hours of driving for us to get to the other entrance of the park, and we were worried we weren’t going to get there before the sun set.  I was carsick and emotional because I was starting to realize that I’d flown all the way down here and wouldn’t be doing any of the things I’d planned on doing because of this crazy snowstorm.  But my husband turned to me and said that we were going to make it no matter what.  And he was right!  One hour before sunset, after driving all day long, we FINALLY made it to the Grand Canyon! 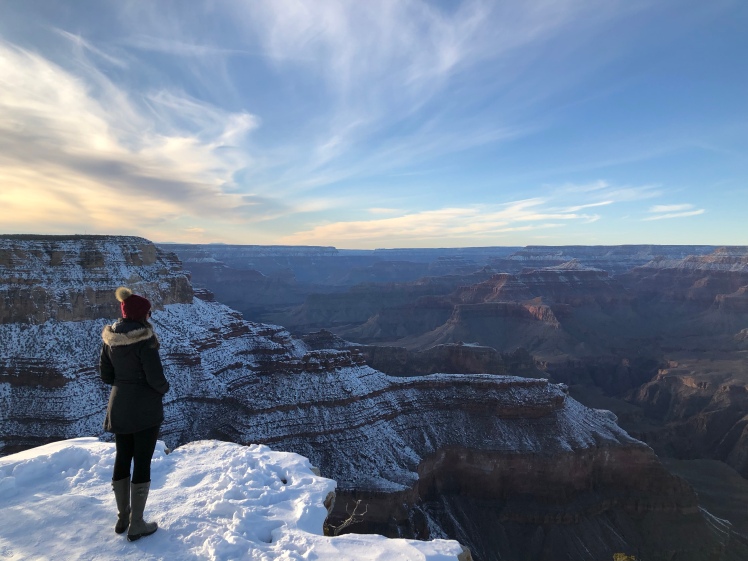 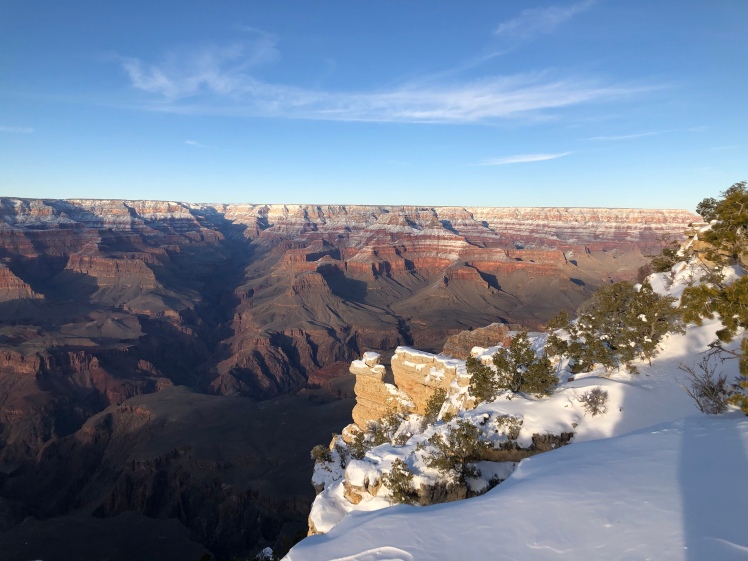 Honestly, my first look at the Grand Canyon literally brought me to tears.  Maybe it was the pregnancy hormones, or the fact that we’d been worried that we weren’t going to make it for three days.  Or maybe it was the endless expanse of gorgeous red rock formations covered in snow and the shock of how much bigger and deeper it was in person.  I really think that the Grand Canyon was the most beautiful thing I’ve ever seen in my entire life.  It was in the single digits and very windy, and there were giant snowbanks everywhere, but we stayed out on the south rim until the sun set and it was too dark to see.  It was worth all the work it took us to get there!  Plus, I’ll admit that the snow made it even more special because most people don’t get to see it under those conditions.

Stay tuned for part two of our super crazy snowy trip to Arizona!

Have you ever had weather almost ruin a vacation? Have you ever seen snow in Arizona? What’s your number one bucket list trip?

6 thoughts on “Our Crazy Snowy Trip to Arizona”

Ellie made a friend at the @alaskasealifecenter!
Our beach camping weekend was amazing! You don’t realize how bad your Seasonal Affective Disorder is until the first 50 degree day of the year, am I right? 😂 But seriously, getting to visit my favorite place and hang out with some amazing friends on/by the ocean is exactly what I needed. All 3 of us had a blast, and it’s so amazing to watch Ellie fall in love with a place that’s so important to me and Andrew!
Currently living my best life in Seward. And I know a lot of people say that, but I really mean it. Seward is my favorite place on earth, and being here has been the most amazing and relaxing way to kick off spring! So far I’ve watched the sun rise and set from our ridiculous cabin on the beach, read a book by the ocean, got a sunburn, walked miles along the coast (mostly because we were trying to get Ellie to nap), went out on our friends’ boat where we saw a mommy and baby humpback as well as a star fish, octopus, otters, and a bunch of eagles, and watched Ellie play with a sea lion at the Sea Life Center. I’m so excited to see what adventures we get up to tomorrow!
Another day, another #basicalaskamom walk with Ellie. Coffee (iced!), Xtratufs, and a hoodie will be my new uniform until the snow flies again!
Today I put my skis away and packed up the ski attachments for the Chariot. Winter is probably not over yet (🙄) but I’m ready to move on to using the Chariot for bike rides!
The first time I hiked the Butte I thought it was awful. I remember wondering why anyone would like that hike 😂 I mean why would you hike a mountain that had stairs on it?!
My “spring” Denali State Park getaway recap is up on the blog! I wrote about how this trip really went down so everyone who has ever tried to sleep with an overtired toddler in a new place knows they are not alone 😂 But the first sleepless night was worth it because LOOK AT THAT VIEW!
Why am I jumping for joy? Because today I got to hike with some old (and new!) badass hiking friends and I didn’t have 35 pounds of toddler/pack/gear on my back! Sadly it was too windy to get much higher up Near Point than this, and it was crazy cold and literally snowing. So we bailed after 5 miles and went to brunch instead. #priorities
Here we are freezing in -11 degrees (in April 😩) but I got to show Ellie the tallest mountain in North America so it was 100% worth it! And let’s face it, I’ll do anything for a good cloudless view of Denali 😍
Just spent the most fabulous 3 days cabin camping in Denali State Park! We snowshoed in -11 degree weather (but hey at least it was sunny!), read books by the fire, and stared at the tallest mountain in North America from our cabin windows. We also attempted to snowshoe up Curry Ridge but gave up after a mile because we had to break trail and our dog was too short to deal with the snow 😂 I was hoping for a slightly more springlike experience but it was a good way to (hopefully) say goodbye to winter!