If you missed my recap of days 1 & 2 of my Resurrection Pass backpacking trip, go here to read all about it!

When I woke up on Day 3 I was starting to feel sore.  Sleeping on wooden bunks in unheated cabins while the midnight sun shines in your eyes is not the easiest thing to do, especially after you’ve been carrying a backpack through a mountain pass over the last few days.  But luckily I woke up to a perfect sunny day and amazing views which put me in a good mood and helped get me out of my sleeping bag.  After another hot breakfast and some coffee we started off on the second half of our hike through Resurrection Pass.

The trail on day 3 took us down from the top of the pass back into the forest.  The views were spectacular and I was thankful that the dirt trail wasn’t covered with anything I could trip over so I could look around as much as possible!  Although there were still the occasional snow patches it was much easier to walk on this part of the trail. 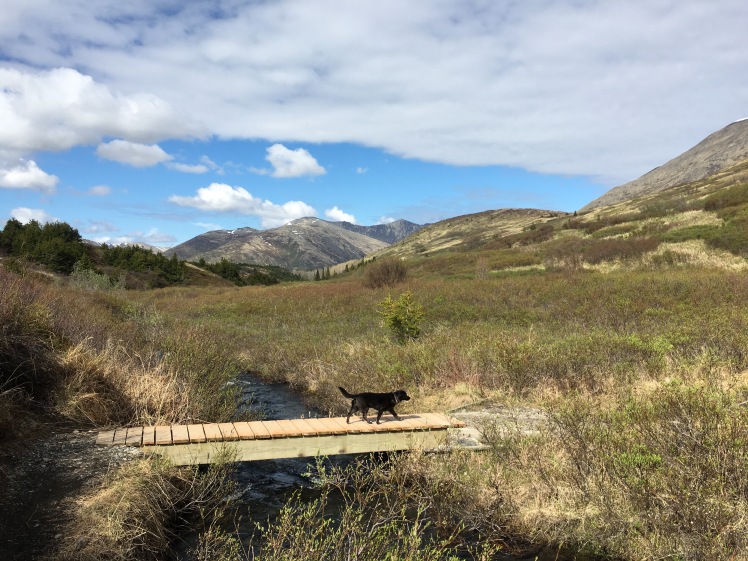 Going downhill felt awesome after a consistent uphill over the first few days.  After walking a few miles our final destination for the day, Juneau Lake, finally came into view in the distance.

As we started to go below the tree line again we got occasional views of Swan Lake and other mountain passes branching off and leading to unknown locations.  I felt like I was stopping every 10 minutes to take another picture but I couldn’t help myself! 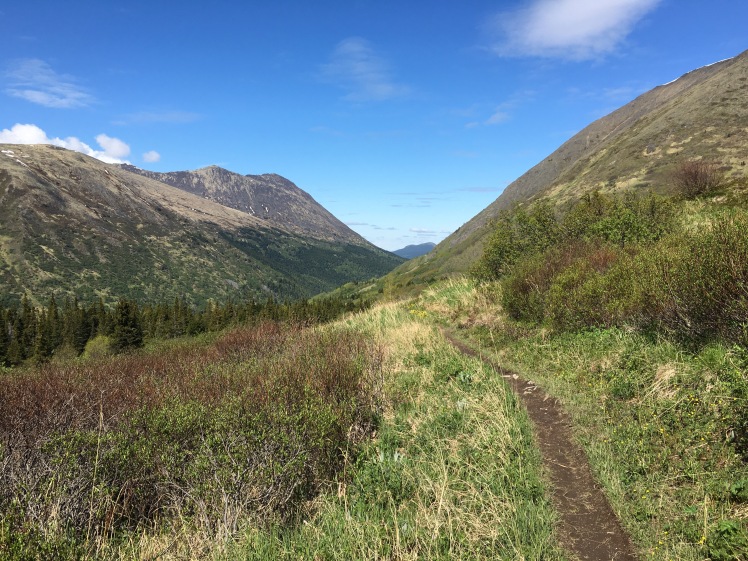 We lost a lot of elevation pretty quickly, and then the trail flattened off.  We stopped for lunch and were feeling pretty good.  But after lunch we started to go uphill again through a heavily forested area with no views, oppressive heat, and swarms of mosquitos.  We knew we were less than an hour away from Juneau Lake but we were dying to be out of the mosquitos and to take off our hiking boots.  I started daydreaming about swimming in Juneau Lake to take my mind off the heat and the foot pain, even though I knew that it would probably be too cold to swim in.  Finally we reached Juneau Lake and couldn’t believe how gorgeous it was!  It was worth every step that it took to get there. 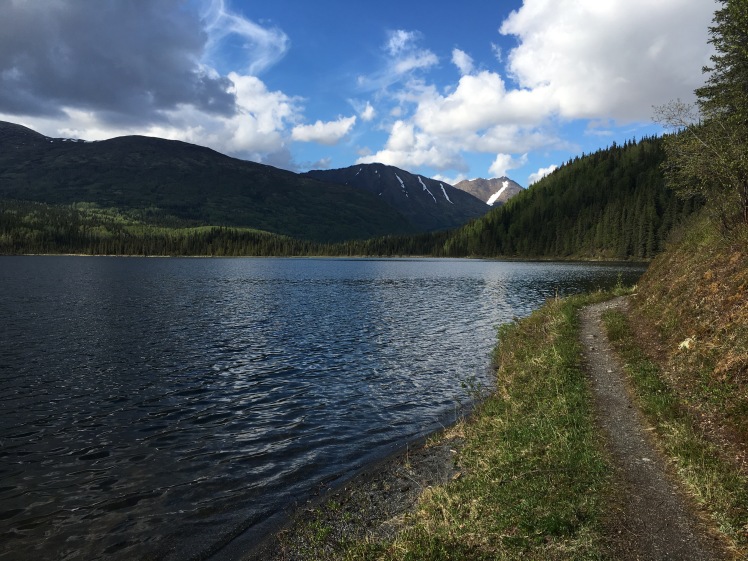 When we reached our cabin we found a large group of hikers eating lunch on the front porch.  They cleared out right away to give us our space, but I couldn’t deny that if I were in their shoes I would have done the same thing.  Our cabin was up on the hill next to the lake with gorgeous sweeping views of the lake and surrounding mountains.

After unpacking and changing into shorts we ran down to the lake to see if we could handle a quick swim.  The water was freezing so Ridley and I only made it halfway into the water, but it felt so good on my tired feet!  We also found a canoe that was available for anyone who rents the Juneau cabin so we headed out on the water for a paddle down to the end of the lake in the sunshine.

After our paddle we spent the rest of the long afternoon relaxing on the deck of the cabin.  I settled down in the sunshine with a book and spent hours reading while Ridley slept next to me.  It was my idea of heaven, and I could have spent a week there.  The sun shined brightly even past 10 pm when we started getting ready for bed.  Eventually we had to just turn away from the windows and hope that we could fall asleep while it was still light out.

Waking up on day 4 was bittersweet for me.  On one hand I was starting to get tired and was already dreaming about eating food that didn’t come out of a dehydrator.  But I also felt like I wanted to stay out in the woods forever and didn’t want our adventure to end.  Regardless of what I wanted to do, we had to pack up and move out.  We left the cabin an hour earlier than usual because we wanted to make sure we had enough time to get home and do some relaxing before the weekend ended.

About a quarter mile down the trail from our cabin was the Romig Cabin, which was situated on the end of Juneau Lake.  The people who were renting the cabin came out to the trail to warn us that they had been paddling their canoe the night before and had seen a bear with a fresh kill only about 300 yards from their cabin along the lake.  Luckily the trail veered away from the lake, but we were still terrified because we had to pass close by the bear and had no way of knowing if we were going to be too close too it.  Bears are really protective of their kills so we knew we were in a sticky situation.  We leashed our dog and held our bear spray in our hands in case we needed it.  We also made a ton of noise walking down the trail.  After about a half mile we felt more comfortable, but I don’t think any of us were able to relax for the rest of the hike.

I had expected to be stuck in the forest all day as we hiked back down to sea level, but we still had some pretty gorgeous views for most of the day.  The views helped distract us from the fact that we were once again warm and tired.

As we hiked towards Cooper Landing we chatted about all sorts of things to take our minds off of how close we were to the end – what it would feel like to thru-hike the JMT, PCT, or AT, what we were going to eat when we got home, and what gear we wished we had brought with us or left at home.  As it got hotter and the mosquitoes got more aggressive we were taking less and less breaks, and my feet and hips started to hurt.  It seemed to get worse as soon as we started hearing cars and seeing the Kenai River through the trees, both of which signaled that the end of the trail was getting closer.  I realized that as you get closer to the end of a hike (or a run) you start to feel worse than ever.  There’s some kind of trick that your mind plays on you that makes you more tired and makes you feel unable to handle much more.  So instead of thinking about the fact that I was almost done, I started to distract myself with thoughts about random things to get my mind off of what my body was doing.  It seemed to work because all of a sudden we turned the corner and we were at the end of the trail!

There were approximately 80 billion mosquitos in the parking lot for the trail, and even stopping to take a selfie caused at least 50 mosquitos to land all over me.  So when we reached my friend’s car we basically threw our packs in the car and then drove off, letting about 100 mosquitos blow out the windows of the car along the highway.  We eventually pulled over at a gas station (far from the trailhead) to change out of our hiking boots and get some food and water, and then we relaxed as we drove back to the trailhead in Hope to get our cars and say goodbye.  It felt weird to backtrack the progress we’d made walking for four days in only one hour in the car!

I’m still processing this hike, but it was definitely one of the greatest hikes I’ve ever done!  I have never walked that far in my life or gone that long without seeing another person except for my group.  I loved hiking above tree line through the pass, seeing lots of wildlife (but no bears), and laying out in the sun by Juneau Lake.  But my favorite part was knowing that my own two feet could take me from one town to another through a mountain pass.  I set out to see what I was capable of, and I learned that I can carry everything I need to survive for 4 days over 39 miles through the wilderness.  I learned that even when I’m struggling mentally and physically that I can push myself to keep going.  And I learned once again that Alaska is the most gorgeous place on earth.  I’m so glad I was able to check this hike off my bucket list, and I can’t wait to do it again!

Have you ever done a thru-hike?  What is the longest backpacking trip you’ve ever done?