In most places in the US, Memorial Day is a hot and sunny day off, filled with days at the beach or the pool and lots of tank tops and ice cream cones.  In Alaska, it’s still spring.  So a couple months ago I decided to rent a public use cabin for Memorial Day weekend so that if it was rainy and cold (as it often is) I could still get out and camp with some friends and enjoy the long weekend.  To my complete surprise, this year’s Memorial Day was a hot and sunny weekend in Southcentral Alaska! 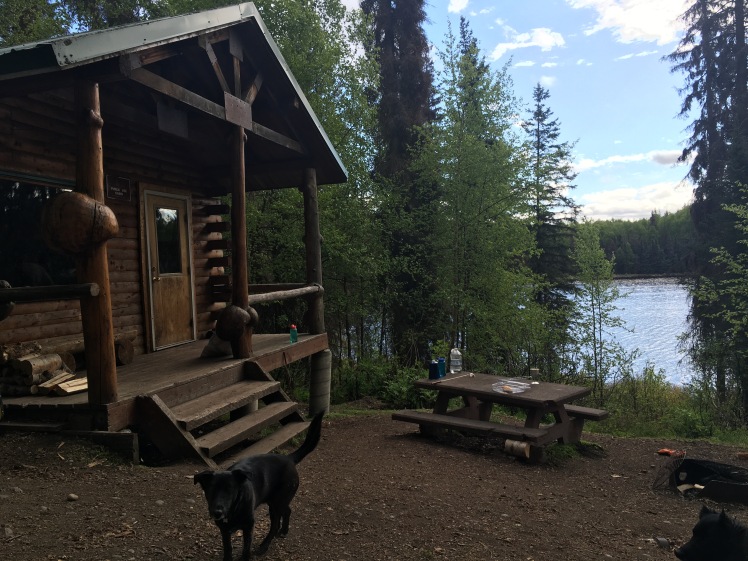 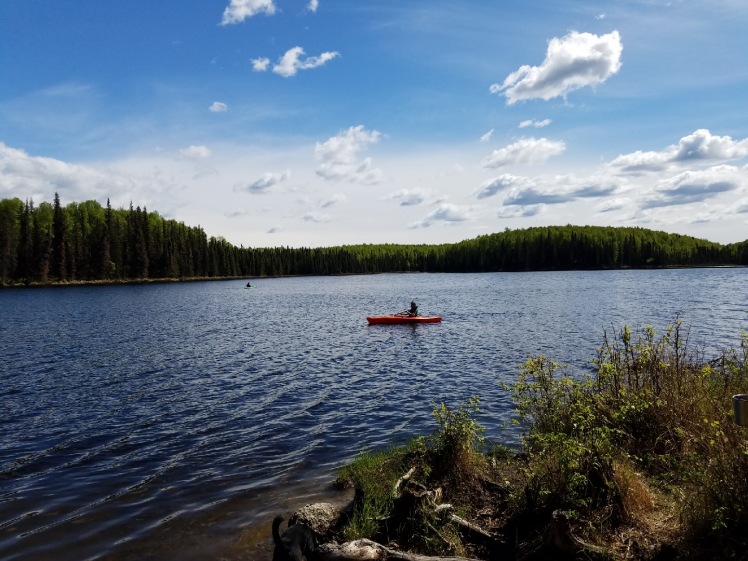 The cabin we chose for the weekend was the Bald Lake Public Use Cabin in Nancy Lake State Park.  It’s a cute little rustic cabin overlooking Bald Lake, but the real perk is that it’s the only building on the lake.  Although it has public access, there’s literally nothing to draw people to the lake unless you stay in the cabin.  So for 3 days we had the entire lake to ourselves!  The hike to the cabin is only about 5 minutes so we were able to backpack in while also carrying our kayaks and a cooler of yummy food.

Almost immediately after arriving at the cabin I decided it was time to kayak.  When you don’t live on a lake getting out to kayak can be time consuming and annoying.  It’s a lot of work to set up the bars on my jeep, lift the kayaks up there (I have no upper body strength), tie them down, and then after the drive to a nearby lake do it all in reverse.  It’s always worth it, but it’s also a bit annoying to do when you’ve had a tiring day at work.  So it was exciting to realize that once we had carried the kayaks down to Bald Lake and all the hard work was over, I could leave them down there and jump in the kayak whenever I wanted.  I must have kayaked 5 times over the course of the weekend, and only the pain in my arms and a sunburn stopped me from going out even more.  Each time I paddled around the lake exploring the coastline for at least an hour, and at one point I paddled out to the middle and floated around while reading a book in the sun.  It was heaven (minus the sunburn I got as a result). 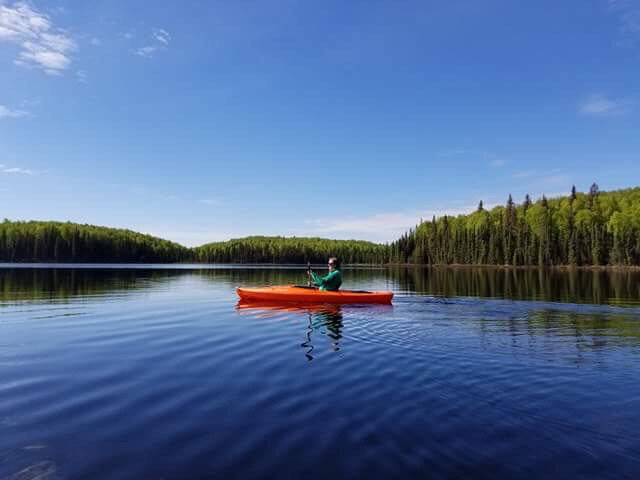 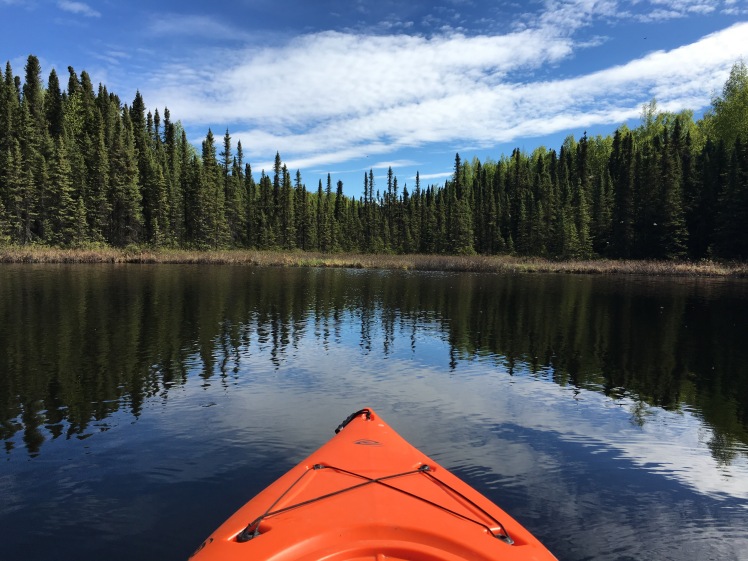 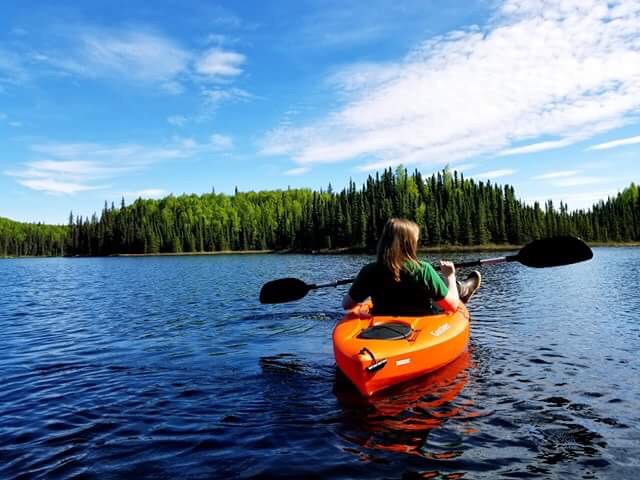 In between kayaking, I hung out with my friends by the fire while eating tons of junk food.  I also swung in a hammock while watching the clouds roll by.  At night we stayed up late playing card games.  Basically, I did a whole lot of nothing – and it was exactly what I needed.

On Sunday night we drove up to Talkeetna for dinner.  It was over 70 degrees and sunny, which is about the best an Alaskan can hope for in the summer!  We ate on the outside deck of Mountain High Pizza Pie followed by a trip to The Roadhouse to buy cookies for later.  We ended our trip with some fireweed flavored ice cream and some killer views of Denali from the banks of the Susitna River.

But the best part of the weekend was a spontaneous paddle in my kayak at midnight on Saturday night.  We were starting to get ready for bed at 11:45 pm and it was still incredibly bright out.  My kayak was calling to me, and since I’d never kayaked at midnight before I decided to go for a pre-bedtime paddle around the lake.  The moon was gorgeous and the lake felt so peaceful and calm as I floated around by myself.  The only other thing out there were some loons! 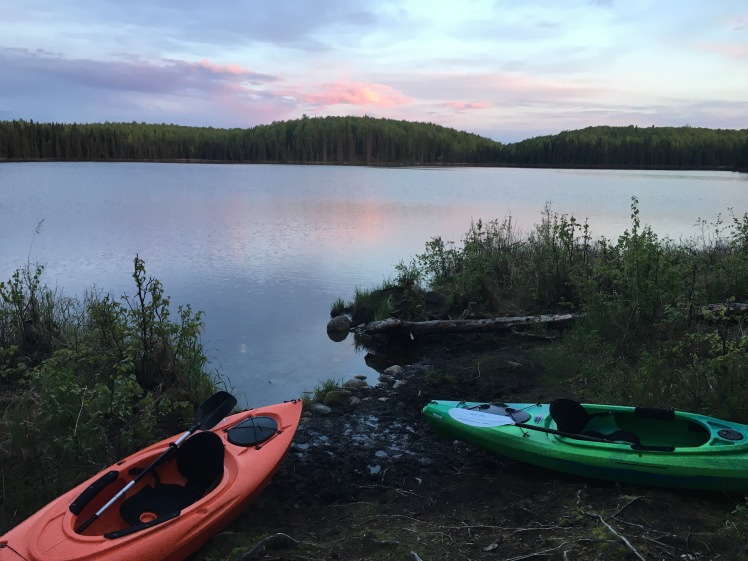 It was really hard to drag myself away from the cabin on Monday morning, and I’m already trying to figure out when I can get back there for another relaxing weekend.  I’ve been spending all of my weekends hiking to train for Kilimanjaro, and this was a really nice break from that.  It’s not often that you get perfect weather, amazing friends, and tons of kayaking in one weekend, so this was a perfect start to what will hopefully be an epic summer!

What did you do on your long weekend?  What’s the weirdest thing you’ve ever done at midnight?

13 thoughts on “A Perfect Start to My Summer”