Tonight’s hike was just one of those hikes…you know, where technically it was a great hike and you’re proud of yourself for doing it, but you also feel like a complete hot mess the whole time.

You might remember my post about being an outdoors newbie, and also the fact that I’m climbing Kilimanjaro in August.  I’m in this weird place where I am sill learning skills and feeling some mid-winter laziness, but I also know that I have to start training for the biggest hike of my life.  So when some new friends from a local women’s hiking group asked if I wanted to go for a sunset hike up Bird Ridge, I said yes.  Never mind the fact that it was a Tuesday, it was starting to snow, I have only hiked a few times this year, and Bird Ridge is literally one of the hardest day hikes in Anchorage and I’ve been too nervous to try to hike it up to this point in my life.

As I started driving down to Bird Ridge it really hit me that I was going to do a hike that I’m afraid of with a bunch of girls I don’t know that well.  I tried to think positive and tell myself that I just hiked Gavan Hill by myself and didn’t die, and by the time I pulled up at the trailhead I was pumped and ready to go.  We decided to hike up to 1500 feet, which is about 2000 feet short of the summit.  I immediately realized as I watched the girls fly up the steep trail that maybe I had been right and I was too slow to hike this tough trail with this group of girls.  I tried to hang on as long as I could without stopping for a break (because the girls had said they weren’t planning on taking any breaks) but I eventually had to stop or I was going to be sick.  As I gasped for air on the side of the trail and watched everyone (including my dog) hike ahead, I was left thinking about how out of shape I am and how I need to actually start training at the gym.  And then I told myself to stop thinking and start walking or I was never going to catch up.

I pushed all of my negative thoughts out of the way and just kept on climbing up, and when I finally caught up with the girls at an overlook I was feeling a lot better because I knew it was break time!.  I was able to push through with a smile, but it didn’t change the fact that I was dragging my way up the mountain much slower than they were and I was feeling embarassed.  When you’re the slowest one in a group you sometimes want to make excuses or apologize a lot or make a big deal about it, but I decided not to do any of those things because maybe it wasn’t as big of a deal to them as it felt to me.  Luckily the group decided to turn around at 1000 feet when it started snowing, and I was able to keep up and actually chat with the group as we slid back down the mountain. 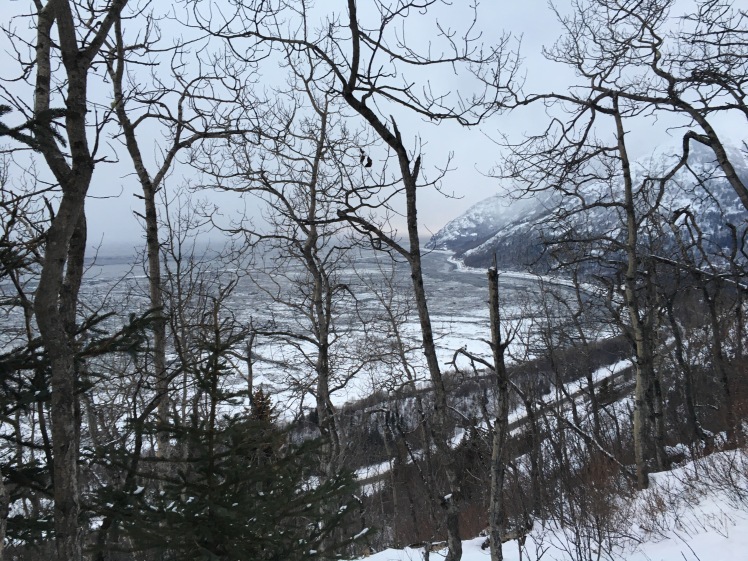 Back at the parking lot we chatted and made plans to hike together again soon, and everyone left with a smile on their face.  I knew I shouldn’t feel this way, but on the drive home I just felt so embarrassed and frustrated for going so much slower and not feeling as strong as the other girls.  That feeling stuck with me up until the point where I saw our funny trail selfies posted on Facebook and read the comments from other girls in our hiking group, most of which said things like “You guys were troopers for doing Bird Ridge in the snow!” and “I wish I could have been there!”.  Yeah, I was the slowest.  I had to take breaks.  The trail was STEEP.  But I did it!  I crossed Bird Ridge off my hiking list on a Tuesday night, got to hang out with some really cool ladies and dogs, and was able to get some amazing views despite the weather.  Since I plan on keeping it real on this blog, I want to put it out there that I’m not always going to feel happy and strong and positive and like I belong on every hike.  And you might not either.  That’s normal!  Every once in a while, you just have one of those hikes.  But as I go to bed tonight, I’m proud of myself for trying a new and difficult hike with new friends in the middle of the week.  And honestly, I’m actually looking forward to hiking with that group again – but maybe something a bit less steep next time.

Have you ever had one of these hikes?  What do you do when you realize that you’re not at the same athletic level as the people you’re with?

18 thoughts on “Just One of Those Hikes”