I stepped into a thigh-deep hole in the snow just big enough for my foot and paused to catch my breath, looking up a the towering trees around me.  I was the last one up this mountain, and I still had a long way to go.  And I was completely alone. 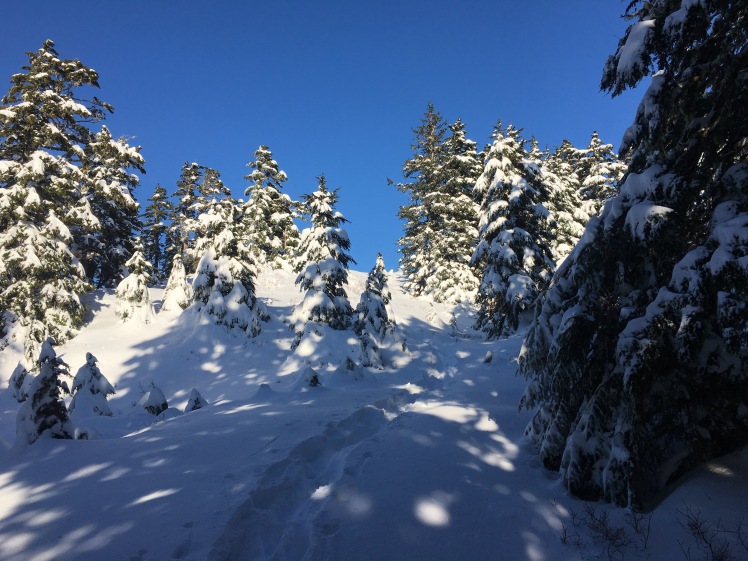 Last weekend I flew down to Sitka alone for a work trip.  I had to work a late night event for a few nights, which left my days completely free.  And with warm, sunny weather most of the time I was there, I knew exactly how I was going to spend my time: hiking!  After asking some of the people at the event where I should hike, the Gavan Hill trail kept coming up.  The information I found online about this hike said was that it was 6 miles one way from the start on Baranoff St. up to the end at the parking lot at Harbor Mountain, which people can drive  up to in the summer.  It sounded like the trail was steep in that direction, but since the road to Harbor Mountain was closed in the winter I had no other choice.  I couldn’t find much information online about what the trail was like in the winter, or what was a good place to turn around (especially in the snow), so I decided to make the first viewpoint 1 mile up the mountain my initial goal and to ask people on the trail where they recommended turning around.

As I walked out of my hotel and headed towards Baranoff St., I was excited but also a bit nervous.  I’d never done a solo summit before, and I was a little worried about hiking in a new place alone.  But I felt that I was prepared for the hike, and because it was a sunny Saturday I knew I’d run into other people on the trail.  Plus, the idea of doing something difficult on my own gave me a rush of adrenaline!

The trail started at a very informative trailhead at the end of tiny Baranoff St. and instantly started winding through the forest on a trail covered in a thin layer of ice.  I immediately put on my microspikes so that I wouldn’t slide off the trail.  The trail turned into the Sitka Cross Trail, which gently rolled up and down through the quiet woods.  I took this trail until I reached the bottom of Gavan Hill and officially turned onto the Gavan Hill Trail, which had a big sign that you can’t miss.  The trail had been pretty flat until this point, but now it started going up and didn’t stop.

The trail was mostly made of stairs and boardwalks, probably to avoid what is for most of the year a very muddy trail through the rainforest.  I made steady progress up the trail, taking breaks when necessary and setting my own pace.  It was nice not to have to worry about going too fast or too slow for other hiking buddies on the way up.  For the first steep mile up to the viewpoint, I enjoyed the silence of the forest and the occasional conversation with people on their way down.  Most people suggested that I try to make it all the way up to the ridge before I turn around, and when I saw the view from the viewpoint I finally decided that I was going to keep going all the way to the ridge.  The view was gorgeous but I figured that it would be even better from the top!

Up to this point I had been sweating and losing layers as I walked on a thin layer of ice and snow up to the viewpoint.  But once I passed the viewpoint, I had to put my layers back on and started to deal with deeper snow.  As I neared the top I began to encounter enough snow that it was hard for me to stay on the stairs and the boardwalks without slipping off.  The footsteps were getting deeper and I was getting more tired and cold.  Plus, because the woods were so dense I was unable to see any good views, which discouraged me and made me feel like I was never going to get to the top.  Just when I started to feel like I should turn around, the stairs stopped and the trail became much less steep.  I had finally made it to the ridgeline and the summit of Gavan Hill – but where were the views? 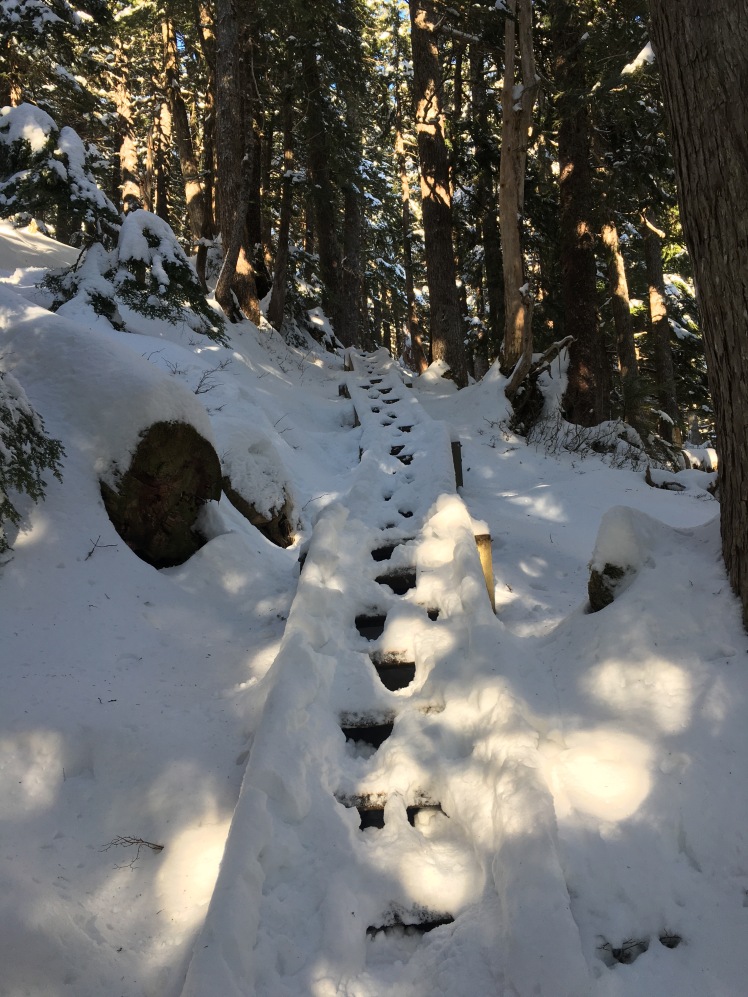 The trail doesn’t stop at the summit of Gavan Hill – it keeps going along the ridgeline and up to the summit of Harbor Mountain, which people on the trail had told me was inaccessible in the deep snow.  I had to keep hiking up to get above the treeline, and I had no idea how long that would take.  I decided to give myself another 20 minutes and if I didn’t make it to a viewpoint I would turn around.  Those next 20 minutes were spent fighting my way to reach from posthole to posthole to save energy and stay as dry as possible.  It was hard because the person who had made the thigh-deep holes in the snow definitely had a bigger gait than I did, and I found myself occasionally losing balance and falling over in the snow.  My gloves were soaked, and my feet began to get really cold.  I knew I was alone up there and needed to make a decision to possibly turn around for safety’s sake, but as soon as I started to think about making that choice I finally got to the spot that I’d been fighting for all day long!

The views took my breath away.  I could see all of Sitka and the surrounding islands to my left, and Mt. Edgecumbe and open ocean to my right.  High snowy peaks were all around me.  I knew I could keep going higher and get treeless views, but I felt like it was time to turn around. 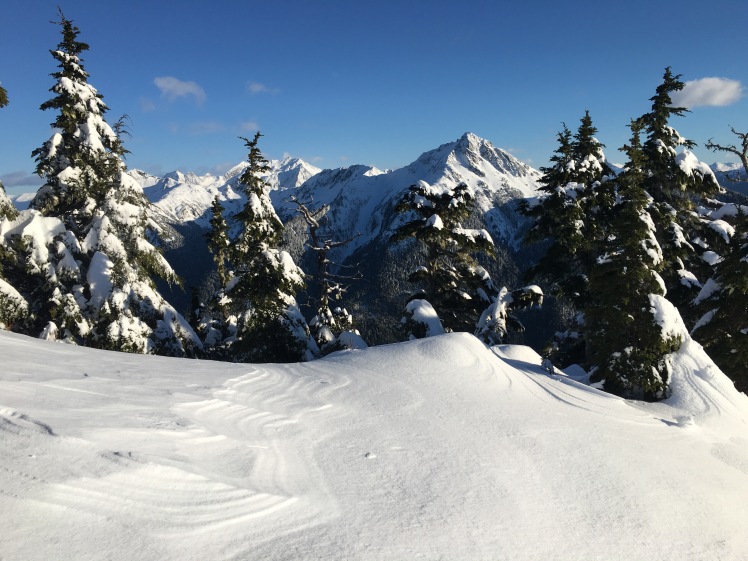 The trip back down the mountain was much faster and easier than going up.  As I descended it got easier to walk in the increasingly thinner snow as well as much warmer.  But I still couldn’t shake the tiny bit of fear that occasionally reminded myself that I was alone out there and was probably the last person to climb the mountain that day.  One wrong move and I would have been in trouble.  I had to use all of my positive thoughts to get myself back down to snow-free sea level.  I made it back to my hotel just as the sun was setting.  I was frozen, exhausted, starving, and so proud of myself!  I had done a total of 10 miles and climbed almost 2500 ft.

Summiting a mountain on my own was definitely empowering, but also scary at times.  I enjoyed being able to hike uphill at my own pace, and it felt really cool to know that I’d fought on my own to get that view.  But the deep snow at the top really slowed me down and made me worry about getting hurt.  I think that Gavan Hill was tough but doable, and I’d love to try it again without any snow at the top.

Have you ever summited a mountain on your own?  Would you ever do it?

22 thoughts on “My First Solo Summit”