I dug my microspikes into the snow as hard as I could, trying not to fall backwards off the mountain.  I gasped as I heard a girl in front of me scream.  I looked up expecting to see her falling off the steep face of Baldy, but instead saw the northern lights dancing above our heads, surrounded by thousands of stars. 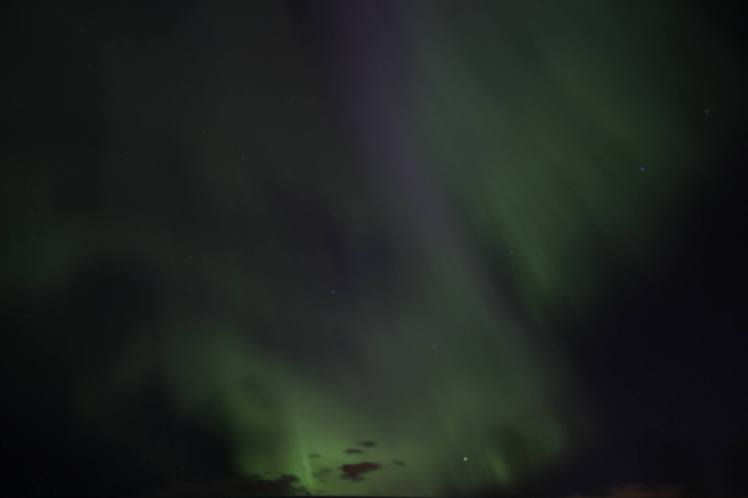 On Tuesday night, one of my hiking acquaintances had planned a Full Moon Hike up to the summit of Mt. Baldy in Eagle River.  There were so many reasons why I shouldn’t have gone on this hike – it was happening in the dark, on a school night, in the snow, with a bunch of people I’d never hiked with before.  The only girl I knew was definitely more of a hardcore hiker than I was, but was really nice and helpful to newcomers.  Still, it would be my first snowy summit, my first nighttime summit, and my first time using my new microspikes on a hike.  I was terrified.  But there was something so thrilling about clicking that “going” button on the Facebook event instead of choosing to stay at home in my warm house watching Netflix like everyone else in Anchorage.

One of the other girls in the group offered to help with rides, and I took her up on the offer.  During the 30 minute drive out to the trailhead, we chatted about being newbies to snowy winter hikes, and how neither of us had summited Baldy before.  I told her about my failed attempt, and we laughed about how hard it is to try new things where everyone seems like an expert.  As we pulled up to the deserted trailhead, it was easy to find our hiking buddies in the only 2 cars there.  We exchanged names while pulling on layers, microspikes, and headlamps. I breathed out frozen clouds and stamped my feet to stay warm in the 20 degree weather as we waited for everyone to arrive – and to get out some anxious energy as I waited to see how this was going to play out.  Was I about to get left behind by a bunch of fast hikers?  Was I going to fall and get hurt?

Finally the seven girls and three dogs in attendance started up the trail to Baldy.  It was hard to see the steep, snowy summit of Baldy and I was grateful for that.  The trail started out with some very easy switchbacks where we were able to chat and move along at a quick pace.  We stopped after about five minutes so that everyone could take off a layer to avoid sweating.  I was quickly down to just a tank top and fleece lined shirt and even ditched my gloves!  Just as I was thinking “This isn’t that hard of a hike”, we reached the end of the switchbacks and the start of the steep part of the trail.  I was so grateful for my microspikes and poles because they were the only thing keeping me from sliding down the steep face in the snow and mud.

At one particularly steep part, the girls ahead of me started screaming.  I looked up and noticed that the northern lights were dancing above us!  Soon everyone was shrieking with excitement.  I had to really dig my feet into the snow and hold on for dear life as I watched the show above us.  It was the first time I’d ever hiked under the northern lights and I couldn’t look away!  By this point we were so excited about making it up to the summit to keep watching, and we pushed on until we had all reached the top.  I immediately celebrated the fact that this was hike #52 in the 52 Hike Challenge (which I’ll talk more about in a later post!).

I was shocked by how easy it had been to summit the mountain in the dark and the snow.  It turned out that not being able to see the top made it way easier – there were no mental games where I was seeing a false summit and getting my hopes up.  And the snow and microspike combo actually gave me better traction than usual.  I was never really tired or winded on the way up, and I wasn’t the last one up the mountain.  All of my fears were for nothing!  At the summit we took lots of group pictures and stared at the rest of the trail as it kept going through the mountains.  We made plans to come back soon and keep hiking along the ridge line.

The way down ended up being much harder for me than the way up.  I was moving slowly and carefully and soon fell behind half of the group.  I was so relieved to get back to the switchbacks again!  Soon I was flying back down the trail and caught up to everyone back at the trailhead.  For the rest of the night, I was in shock at what I’d just done.  For the first time ever I had done the following: summited Baldy, hiked in the dark, summited a mountain in the snow, hiked with microspikes, and hiked under the northern lights!  And honestly, it was probably my first Tuesday night hike too!  It was a night of firsts and I was so proud of myself for getting out there and trying things that scared me.  Hiking under the northern lights and summiting a mountain under the stars with other awesome hiking ladies was such a cool experience and I can’t wait to do it again!

Have you ever hiked in the dark?  Tell me about a recent “first” for you!

12 thoughts on “A Mountain of Firsts”