The weather was sunny and warm in Southcentral Alaska this weekend, so I decided to fill it it with lots of gorgeous hikes.  And what’s more gorgeous than a glacier?  Two glaciers – with a glacier-free hike in the middle! 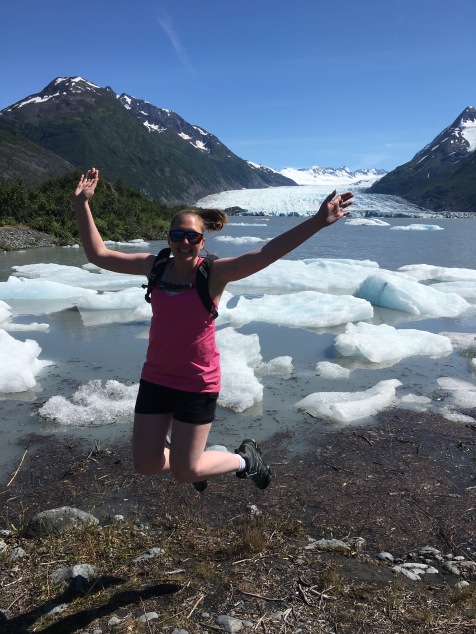 On Friday I came into work extra early so that I could leave early for our first glacier adventure.  At noon my friends and I drove down to Portage and caught the train to the Spencer Whistlestop, which is the only way to get to the hike that leads to Spencer Glacier.  The train ride was only 20 minutes but it was gorgeous!  This is a notoriously rainy part of Alaska so these clear sunny skies were a major surprise.

Once we got off the train we consulted with the National Park Ranger about making it out to the final overlook at the end of the trail, about 3 miles away from the tracks.  She basically told us we couldn’t make it out there and back before the train left, which we took as a challenge.  So we kicked it into high gear and hiked as fast as week could for the first mile until we made it to the first overlook at the edge of the lake.  Spencer Glacier was gorgeous!

After a whole lot of pictures, we continued on to see how much of the rest of the trail we could do before we had to turn around.  I would say that about half of the trail was in the trees, and the other half had gorgeous views of the glacier, the lake, and the icebergs floating around.  There were a few people kayaking on the lake as well.  And I was incredibly jealous of everyone who was backpacking and especially jealous of the group that was staying at the public use cabin that overlooked the glacier!  There’s so much to do out here and I’m coming back to try it all!

We were almost at the end of the trail when we had to turn around to make it back to the train.  Except that we forgot that it’s always so much faster on the way back because you’re not stopping for a bunch of pictures!  We were about 15 minutes early but used that time to eat some snacks before heading back to Portage.  Next time I’ll spent less time taking pictures and more time hiking so I can make it all the way to the end!

On Saturday we hiked a non-glacier hike in Hatcher Pass, which deserves its own post (look for that on Wednesday!).  But on Sunday I decided to finish off my weekend with another glacier hike!  You may remember my post about hiking Crow Pass last summer, which was a huge bucket list moment for me.  I loved that hike so much that I knew I had to do it again this year.  The weather down in Girdwood was clear (also not very common for sunny skies in that town!) so my husband and I headed up to the pass.  As soon as I got out of the car I knew it was going to be tough – it was “Alaska hot” which is about 80 degrees, and there were lots of black flies in the first mile.  That meant that for the first initial uphill parts we couldn’t stop to take a break or catch our breath because the flies would start eating us alive.  So we pushed ourselves to keep going as fast as we could until we hit the tree line.  Once we were up there, the sun was just beating down on us without any shade, and there was a warm breeze that was doing nothing to cool us off.  It was a tough gradual uphill slog until we made it to the waterfall.  Crossing the creek felt so good!

At this point in the hike it’s a lot windier and the views are gorgeous, so we were no longer miserable.  Plus, we saw some mountain goats coming down the mountain which perked us right up.  When we came around a corner we saw a family of mountain goats crossing the trail right in front of us.  I’ve never been that close before, and it was such a cool moment to watch them walk down to the creek for water! 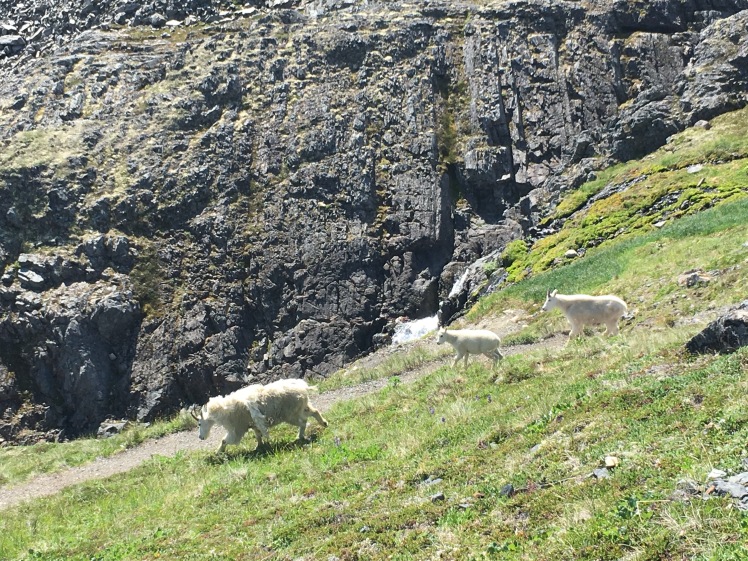 We had one final uphill push to Crystal Lake, and soon after that we were at the top of the pass!

It’s always great when you reach a “You made it!” type sign on a trail – it’s such a good turnaround point.  But the real prize at the top of Crow Pass is Raven Glacier.  This glacier is huge and even though it looks close, it’s still pretty far away.  I hiked down into the valley a bit to get a full view of the glacier and the snowfield.  I had to hike on snow to do it, but it was worth it! 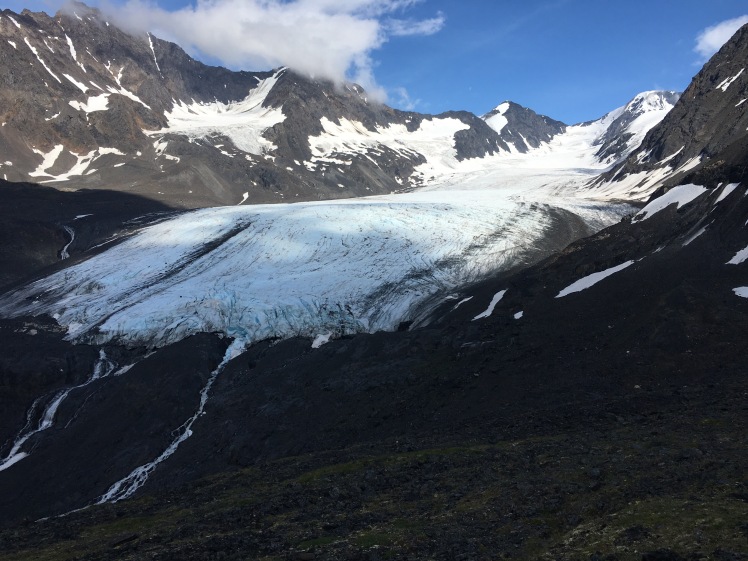 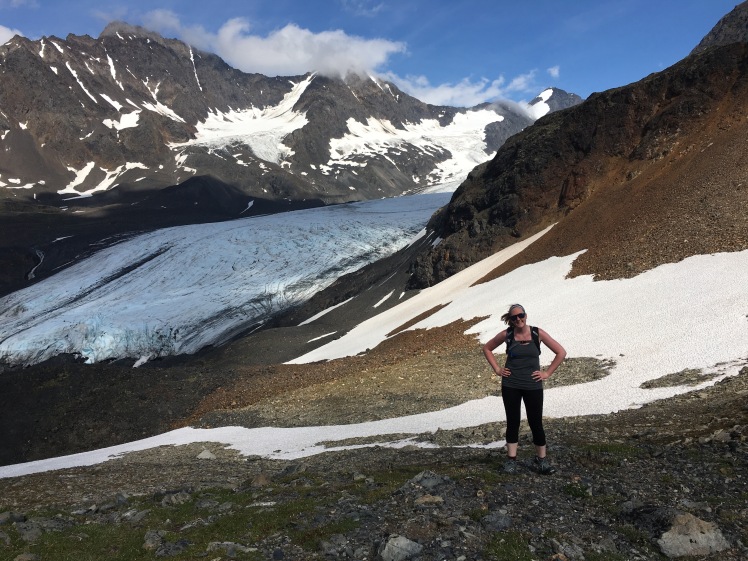 Heads up if you’ve never stood in front of a glacier:  there’s a cold breeze that blows off glaciers even on warm days .  Even though I’d been overheating all day I was freezing by the glacier!  I spent as much time by the glacier as I could before heading back down into the sun and heat again.  This hike is long (I logged 10 miles!) but so worth the time and effort to get up to the pass.  I definitely need to backpack this whole trail someday!

Have you ever hiked to a glacier?  What’s the craziest thing you’ve ever seen at the top of a trail?

11 thoughts on “My Weekend Was A Glacier Sandwich”