This weekend was a perfect spring weekend in Alaska. The sun was up longer than it was down, there wasn’t a cloud in the sky, and the temperatures were in the 30s. It was the perfect weekend to get outside!  On Saturday I planned on laying around and being lazy, but my friend wanted to walk her dogs and invited me and Ridley. We decided to try something new and went up the Gasline Trail in Far North Bicentennial Park. Once we got to the part where the gas lines meet up with the power lines that reach all the way from Anchorage across the mountains, we decided to keep going up. And it was a great idea because the views were amazing! 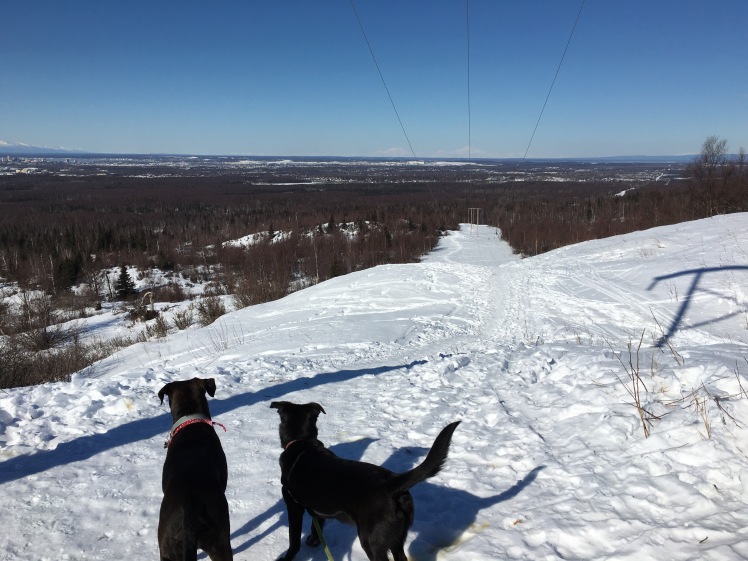 We could see all of Anchorage from up there, and we could also see Denali from hundreds of miles away. The trail wasn’t steep at all – it slowly rolled up and down as it traveled up towards Glen Alps. We stopped hiking once we reached a giant canyon because the dogs were looking tired, but some day I want to hike that whole trail up into the valley!

On Sunday I started the day out with a swim clinic for triathletes at my gym (more on that later) but decided I needed to spend some time outside too. So I decided to try yet another new thing and planned a trip to fat bike out to Knik Glacier on the frozen Knik River. Reports online said that it was a 9 mile trip one way through “hard packed, fast trails” along and over the river, and that after a bit of riding in the woods it was mostly a ride on the river and lake and the glacier was visible for a lot of it. There were tons of amazing pictures online to tempt me out there, so even though my longest bike ride was around 13 miles I decided to go for it before the snow melted too much to make the trip impossible.

But it turned out that whoever wrote those trip reports was a total bike champion or something because I had a completely different experience out there. I expected the ride out to the glacier to take an hour and a half max, but after an hour and a half I was still at mile 4.5 and decided to turn around early.  A lot of the trail consisted of mushy snow with deep squiggly ruts that my tires kept wanting to pop out of (and when that happens it’s really hard not to fall over), and I had to walk my bike the first half mile until we got to harder packed snow. It turns out that some 4 wheelers messed up the trail last night, and I couldn’t believe my bad timing. It was so hard pedaling under those conditions, and even my super biker friend who came with me said that the trails were hard (although I’m sure she would have made it out to the glacier without me). She taught me so much about biking and I’m so grateful that I got to go out there with her! 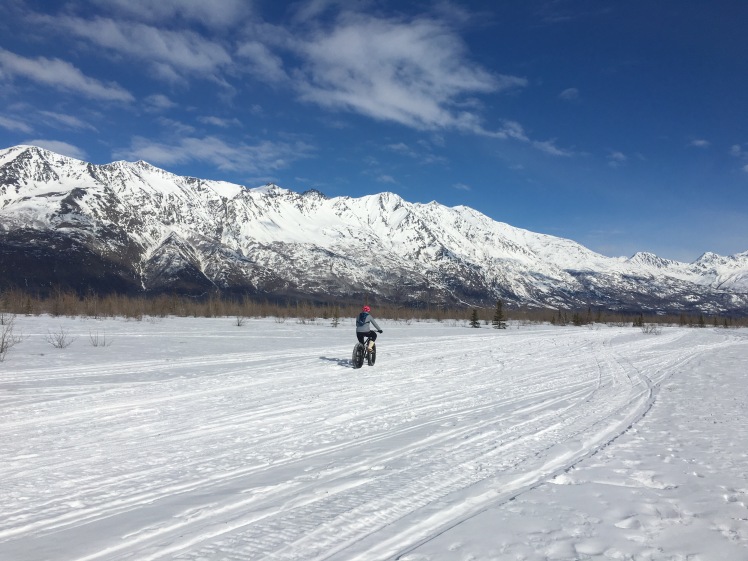 Even though I spent the entire time trying not to crash on the trail (spoiler alert: I fell a bunch of times) or pass out in the warm sun while pedaling like a crazy person, I’m still glad I went. It was the hardest bike ride I’ve ever done, but the only way to get better is to try all the crazy hard things, right? The best part happened right before we turned around – we saw the Knik Glacier 4 miles away and almost fell off our bikes in shock over how big it was! It was such a hard decision to turn around once I’d seen it but I knew I didn’t have it in me to do twice the distance I’d already done. And unlike many of the other glaciers that are disappearing in Alaska, I know that glacier will still be there when I’m ready to make the full trip.

In the mean time, I have lots of practice biking to do! I can probably say after that ride that I can handle some tough winter conditions on my bike, although I might not want to try something like that again for a while now that I know what it’s like. I’m okay with the fact that I technically failed at what I set out to do because it helped me learn a lot about how to bike on snow and it also taught me what I’m mentally capable of!

What’s the craziest bike ride you’ve ever taken? What’s something you used to fail at but now can do pretty well?

2 thoughts on “Trying (and Failing At) Some Things”

I haven’t posted about this in a while, but Elliott has been making some awesome progress with his walking! In case you’re new here, Elliott has significant gross motor delays due to lower muscle tone and flexible ankles. He’s still not able to stand on his own yet, but he’s been walking up a storm while holding our hands and we think he’s close to maybe getting more independent on two feet! We’ve been talking with his PT about next steps, and she suggested a few things including that we try to get him to use his adaptive walker outside (he’s a pro indoors) and that we have him wear his orthotics as much as we can.
Having a two year old is the coolest thing ever. Now that Elliott finally has the words to talk about things and the ability to understand more of the world around him we’ve been having so much fun exploring together! On Monday night we took him to see the sunset. We didn’t get the chance to see many of those since March because they happened after his bedtime, so now that it’s getting darker earlier he’s kind of experiencing them for the “first time”. He had a blast! He loved hanging out by the water, told me all the colors he saw, and waved bye-bye to the sun as it set. I’m looking forward to more nights like this throughout the winter!
I’m pretty sure fall is over because 90% of the leaves are on the ground, but I still have a ton of fall pictures so I’ll just keep posting them and pretending it’s still fall in Anchorage 🤷‍♀️
Happy Alaska Day! Today we took a moment to think about how lucky we are to live in this wild and gorgeous state that we love. Making the choice to move here over 7 years ago was definitely the best thing we’ve ever done! But living here isn’t always easy.
Anne of Green Gables said it best: “I’m so glad I live in a world where there are Octobers” 😍
Elliott’s current obsession on every hike, stroller walk, or playground visit is to “pick leaves”. He likes to find the best leaf from the ground and carry it around for a while examining every inch of it until it’s time to pick a new one. He tells me all about what he sees: the color, if it’s big or small, and if it has “sprinkles” (AKA polka dots). It’s my new favorite game of his and I’m not excited about the fact that this game is going to be over soon!
High fiving Elliott because today we hiked a new portion of the Turnagain Arm Trail, found some peak fall leaves, and climbed to these epic views. Oh and also because we got through our first bear encounter together!
Today was a perfect hike with one of my favorite people @ashleyinak! We hiked out to Echo Bend, drank backcountry PSLs and ate pumpkin bread on the banks of Eagle River, chatted for hours, and soaked up the last of fall. I’m still not ready to let fall go but it looks like the leaves have already started to say goodbye 😢
Fall has always been my favorite season, but celebrating it with a kid makes it a million times better! I’ve always loved the changing leaves but watching Elliott get excited about the bright colors and the leaves falling around us makes my basic mommy heart so happy. The yellow may be fading and the leaves are falling but we’re still trying to enjoy every little bit of fall that we can!
I’m super excited to announce that I am one of the newest members of @cotopaxi’s Advocate Team! I bought my first Cotopaxi jacket a few years ago because of its super bright and fun mint green color, but I also loved their motto “Do good” and what they stand for. They are a B Corp, put 1% of their profits towards addressing poverty and supporting community development, and their gear is made using product remnants that would otherwise be thrown away. Plus who doesn’t love wearing fun colorful gear?

The Road Goes Ever On

life on the road in a tiny trailer

Exploring the outdoors, one trail at a time

Destinations, daytrips and other travel musings on the iconic and the uncovered.

Bringing the kids along for the adventure!

Running, personal fitness, health & wellness - I can help you achieve your goals

On the Loose Live

Exploring The World One City At A Time

Vancouver, British Columbia and beyond

Tent living and traveling with kids

A Couple's Journey Around the Globe

Just a Girl Hiking Her Way to an Extraordinary Life

More than a fitness challenge. We inspire and support you to move (walk/hike/bike/paddle) at least 365 miles in one year. Join us today and begin your own 365 mile journey!

Just try and keep up

A Travel Blog by Caroline Norton

an amateur adventurer, with almost no expertise, boldly taking trips

Running and Laughing through the Golden State

The wonderful world of Utah County. And Real Estate. And Dogs. And Hiking.

bringing you the best of the pacific northwest

Living nomadically, exploring, and wandering to learn about the world, its people, and ourselves.

Best family adventures around St. Louis and beyond

Adventuring does not end when you have children. It is only the Beginning.

a bunch of blondies in a baked potato

If you can dream it, you can do it.

And Then We Laughed

have kids, will adventure