Hi everyone!  Happy 2017!  It feels weird thinking that December is over.  We’re now in the long, dark part of the winter, and I remember feeling really depressed and miserable during this part of my first winter here in Alaska.  Ever since then, I’ve tried to look for ways to stay active and adventurous during the long winter months.  So when I started thinking about how I wanted to spend my New Year’s Eve, I looked into renting a public use cabin so that we could go somewhere awesome and still be able to bring Ridley along.  I couldn’t find any that were available on New Year’s Eve, but I did find one at Nancy Lake that was available on New Year’s Day at noon through January 2nd at noon and I booked it on the spot.  My office was closed on January 2nd, so I asked my coworker and her partner to come with us too.  None of us had ever been to Nancy Lake before, and we had no idea what to expect.  But we were excited for an adventure!

Andrew and I have never gone backpacking before, and because it was winter we were especially worried about being unprepared.  I’m going to write a separate post about how we prepared for this trip and what gear we used because winter backpacking is tricky to figure out for the first time.  We ended up being over prepared which is always a good thing!  The over preparedness started in the parking lot, where we spent five minutes getting all geared up in our snowshoes only to realize that the trail was already pretty packed down and we could walk easier without them.

Once we ditched the snowshoes, we hiked out to cabin #3.  Cabins 1, 2, and 4 all have trails that lead right to the cabin, but cabin #3 can only be accessed by the lake.  In summer that means by kayak or canoe, but in the winter you can just walk right on the lake!  The map said it was about 1 mile, but it was definitely shorter and really easy.  We hiked in with all of our gear on our backs except for our wood and jugs of water, which we pulled on two cheap plastic toboggans.

Our trail on the lake

We got to the cabin after 1:00, and we only had until about 3:00 until the sun started to set.   So we took some time to set up the cabin while we still had light. 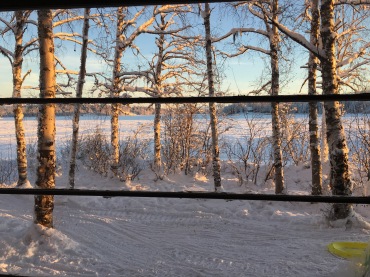 The view from our cabin!

There was a separate area with a counter that was the “kitchen”, as well as a separate bedroom nook with 4 large wooden bunks.  In the main room there was a super warm wood stove and a picnic table where we spent most of our time.  After getting everything set up for bedtime and dinner, we took a nice long walk across Nancy Lake while the sun set.

Once it was dark, it was so much harder to pass the time!  We played Rummy for a few hours by lantern light, ate dinner, and tried to read.  We also kept running outside to look at the stars, which were absolutely insane!  I’ve never been that far from a city at night before, and it was so cool to see so many stars.  We even could see the Milky Way.  It was awesome!  We got tired around 9:00 pm and decided to go to bed early because when it’s dark there’s basically not much else to do.  We loaded up the wood stove before we went to sleep, but because it was around -10 degrees outside it was really hard to keep the cabin warm.  We had to wake up a few times throughout the night to add more wood but it was still a chilly night.  I was so grateful for my new zero degree rated sleeping bag!  My gear was actually really comfy, but it’s just always hard to get a good night’s sleep when you’re in a cold, hard place.  We all woke up around 9:00 and ate breakfast in the dark while warming up by the fire.  When the sun started to rise around 10:00, I took Ridley out to play on the lake.  The sunrise was gorgeous even though it was so cold that my eyelashes frosted over! 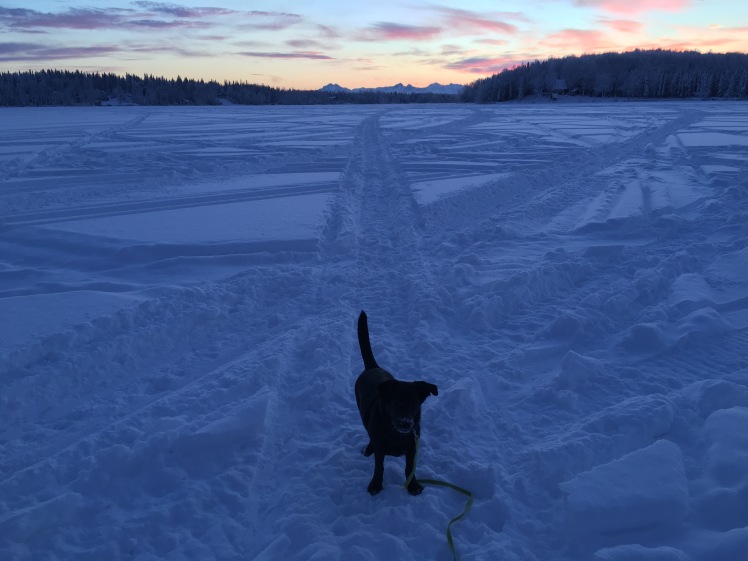 After packing up, we hiked back out to the car with way less to pull on our sleds now that we had drank all the water and burned all the wood.  We stopped in Wasilla for the yummiest lunch and hot chocolate on earth, and then headed home.  The very first thing I did was jump into the bath to warm up and clean up.  And because I was sore and tired, I was really excited about adding some Epsoak Sport Epsom Salt to my hot bath!

According to their website, “Epsoak SPORT is made with premium grade Magnesium Sulfate, a mineral known to minimize muscle cramps, increase recovery rates, and eliminate post-workout slumps”.  I’ve always used epsom salt in my baths to help relax my muscles, so getting to test out Epsoak Sport Epsom Salt throughout the month of December sounded like heaven to me.  After a run, a long ski session, a hike through the snow, or even a night backpacking, the only thing I want to do is be pain free.  I love that Epsoak Sport Epsom Salts help you detox, recover, and prevent injury while you get to do something relaxing.  I added 4 scoops of their “Energizing” mix to my bath and then relaxed for a half hour while reading a book.  It’s the easiest way to recover post-workout and the fact that it smells like peppermint makes it even better!  My goal is to stay injury free for all of my outdoorsy adventures in 2017, so this product has a permanent place in my recovery routine.  I love it and really look forward to recovery time now!  Want to try it out for yourself?  Use code “RAVE10” to get 10% off Epsoak SPORT 5lb bags in all scents. 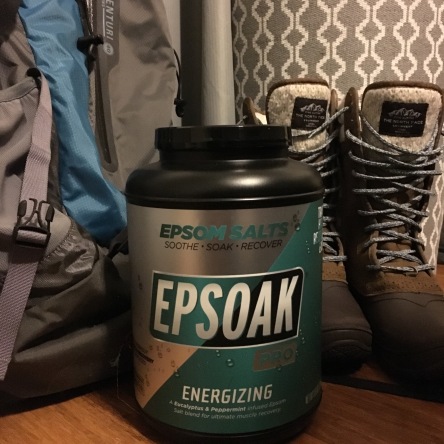 Have you ever been backpacking in the winter?  What is your favorite way to recover when your muscles are sore?

Disclaimer: I received Epsoak Sport Epsom Salt to review as part of being a BibRave Pro. Learn more about becoming a BibRave Pro (ambassador), and check out BibRave.com to review, find, and write race reviews!