Hi everyone!  I hope you all had a great weekend!  My weekend was jam packed with fun stuff!  On Friday night I went to a game night with a few couples that I just met, and on Saturday I spent the day making ugly sweaters with my friend for us and our husbands before we went out to an ugly sweater pub crawl!  Sunday was spent relaxing and celebrating the first night of Hanukkah with my husband.  When I think about this December versus last December I’m pretty happy with how things are going – we’re making new friends, doing fun stuff, and keeping busy in the winter.  Have I mentioned how much I love living in Alaska?  🙂  Anyways, here’s an update on what I was up to last week and how I’m doing with my December goals (if you forgot what they were, go here!):

Things I’m not doing so well on:  First of all, the gratitude journal idea isn’t working out so well – but that’s because I always spend the last few minutes of my daily short yoga practice focusing on what I’m grateful for, and it just feels a little strange to then go and write that stuff down.  It just makes more sense for me to think about those things instead of writing them down, so I’ll be doing that from now on.  But I can say that I’ve been able to come up with three meaningful things each day so far!  The other thing I’m failing on right now is the no sugar challenge.  I was doing great until Friday and Saturday when I spent time out with other people.  But I guess if I’m sugar free all week long and only have sugar on the weekends then it’s still an improvement over what I used to do.  I’m hoping that next weekend I can attempt to be a bit more sugar free!

But the good news is that I’m doing great with the rest of my goals!  I am totally rocking my #25daysofholidayspirit challenge.  I’ve been able to do something festive at least once a day so far!  If you’re not following me on instagram, here’s what I’ve been up to over the past 6 days:

December 1:  I bought a new ornament for our tree!  I get a few each year but this was the first one of 2015.  I definitely have a thing for rustic reindeer right now!

December 2:  I’m a big reality TV nerd so I had to watch this new TV show called “Santas in the Barn”.  It’s awful, but my husband and I have way too much fun watching it!

December 3:  I put up my mini tree and Christmas countdown at work! 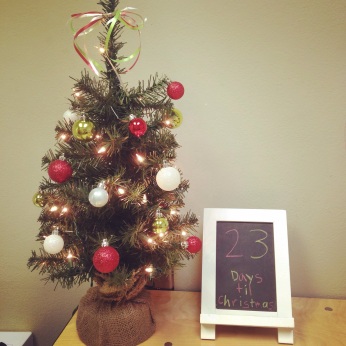 December 4:  We spent our lunch making paper snowflakes to decorate our office.  It was snowing a bit outside so it was a nice touch!

December 5:  I rocked the ugliest Christmas sweater on earth (I basically bought everything in the Christmas aisle and hot glued it to myself, and then I wore lights that actually lit up.  So many people stopped to give me compliments!) and my husband was one of two people in town rocking an ugly Hanukkah sweater!

December 6:  We celebrated the first night of Hanukkah with healthy sweet potato latkes (if you want the recipe go here!).

And for my last two goals, here’s what I’ve done so far:

Wait what?  Yes, I was tentatively cleared to run at my PT appointment on Thursday – he said I could start with 10 minutes and go from there.  So I did my first run on Friday and even though I was really nervous it went okay!  Later that day the entire lower half of my body was a bit sore, but I’m not sure if that’s just because it was my first run in such a long time or if I’m still injured.  There’s a difference between the soreness I felt and the injury pain, so I’m going to tentatively continue on with the 10 minute runs until I see my PT again on Thursday and we can discuss it – but if I get any pain at all between now and then I’ll stop.  This injury has helped me get better at listening to my body so I’m going to use that skill this week for sure.

How was your weekend?  Did you do anything especially festive?

20 thoughts on “A Very Festive Weekend and Some Updates!”