Hi everyone!  I’m still recovering from my weekend of sugar and carbs over here, is anyone else feeling the same?  And sadly, I’m still recovering from my running injury (missed the details?  Check out this post to get caught up!).  Although I’m meeting with my PT tomorrow and I’m hoping for good news – especially because I signed up for an ugly sweater race a while ago and it’s coming up next weekend and I’d love to run even just a mile of it instead of walking the whole thing!  It’s officially been over a month since my last run and while I’m really glad I decided to go to the doctor and give myself a break so that I could fully recover and stop the hip pain, I’m starting to get a bit impatient to get out there again.  I’m in a positive place mentally, but it just gets old after a while.  Plus, being an injured runner is no fun at all.  The things people have been saying to me are crazy!  If you’ve never been injured, here’s some tips on what NOT to say to an injured runner (and yes, these are all direct quotes from the past month!): 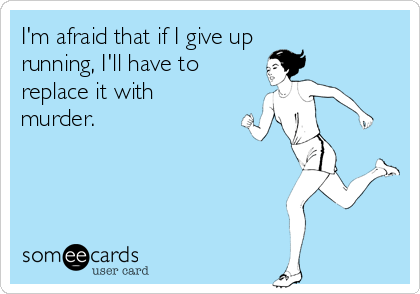 I haven’t murdered anyone yet, even with all of the following real conversations I’ve had!

– “This is probably for the best, you were too obsessed with running anyways”.  First of all, I’m not.  I’m a slow runner who runs 3 times a week at around 10-15 miles per week.  If I’m not training for something I just do easy runs each time and I don’t have a coach or even a real running club that I belong to.  I just like to talk and blog about running and I like running races.  That does NOT make me “obsessed” with running, which holds a connotation that it’s somehow a bad thing to run.  The tone in which this one was said to me really got under my skin too.  I felt like I was being judged for being a runner and they were happy that I was somehow “free” from that burden.  Ugh.

-“Aren’t you going to die without being able to work out?”.  Um, no?  I’m cleared to spin, use the elliptical, and do yoga (as long as the poses don’t involve standing on one leg).  I’m going to keep working out even though I can’t run.  And on that note…

-“I don’t think you should be going to spin class, don’t you think you’re pushing yourself too much?  You’ll get injured again!”.  *screams internally* If my doctor clears me to do an activity, and then literally writes it on my weekly workout list to be completed three times a week, I’m pretty sure that means that I can do it.  If it hurts at all, I’ll stop and consult my doctor.  I trust his opinion on this topic more than anyone else.  This one was actually said to me by multiple people so there has been lots of internal screaming over the last month.

– “Why are you so upset?  Do you feel like you’ll lose your identity as a “runner” now that you’re injured?”.  To be fair, this one was said with kindness and concern for my mental well being.  And it really did get me thinking about what injuries can mentally do to runners who strongly identify as a “runner” and can get upset when that ability is taken away from them.  But this was said right after my diagnosis (like seriously an hour later) and I hadn’t had time to let everything sink in yet.  I feel that questions like this can come later.  Don’t rush an injured runner into thinking about their “lost running identity”.  On day one I thought for sure I’d never be a runner again, but now I’m much more positive about things and know I’ll be back to running soon – and I’ll be better and more careful than ever before.

-“I wish my doctor would tell me not to run!”.  This is another one that I’ve been hearing a lot.  I know running is not liked by many people and that’s totally okay – but just imagine if I said this about something that you like to do.  It might sound amazing to have a doctor ban you from doing an unwanted activity to give you an excuse not to do it, but this is something I really love doing and I don’t plan on using it as an excuse to slack off.  I never could figure out how to respond to this one without sounding upset, so now I just stand there until they stop laughing and then I change the subject.

-“Do you want to go for a run/sign up for that race?  Oh wait…sorry…”.  This one makes me sad every time someone does this to me, even when I know it’s an accident.  I miss my running friends and signing up for all the races so I hate saying no!  I have zero races booked for 2016 just to be safe, and it’s killing me! 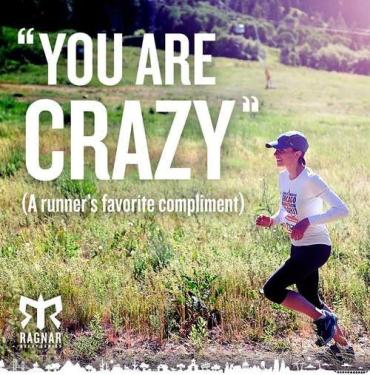 I’m only crazy because people won’t stop saying these things to me!

I get that running is not everyone’s idea of a fun time.  But it’s one of my favorite hobbies, and I miss it a lot.  And I don’t see anything wrong with missing something that I enjoy doing and that’s good for my mind and body.  So maybe tell me you’re sorry to hear that I can’t run right now and that you can’t imagine how this must feel for me.  Offer to do other workouts with me instead of running.  Ask about my progress and get excited about it with me.  And don’t try to make it about you and your negative relationship with running or working out.  I’ve learned to not talk to non-runners (especially my mom who is always worried about me!) about my injury progress because it’s just easier to get through it alone with my positive thoughts instead of their negative/hurtful ones.  And I’ve been spending lots of time working on my hip strength and mental strength so that I’ll be a much stronger person once I’m cleared to run again!  No matter how long it takes before I run again, I know I’ve got this  🙂

Have you ever been injured?  What’s the worst thing someone has ever said to you while you were waiting to run again?  And what is something you wish people would say when you’re injured instead of these things?