Hi everyone!  It’s time for the final part of my Ragnar Relay Colorado recap!  If you missed the first part of my recap, go here!  Warning:  this one may be a bit long and picture heavy, but as I was preparing for this race I loved reading all of the details on other blogs that I’m putting in this post.  It’s such a hard race to prep for mentally and physically and all advice helps!

In case you forgot where I left off, I had just finished running my first leg – 6 miles at 9400 ft above sea level.  Even though I knew I was done running my longest and highest leg of the race, I was still nervous about what was yet to come.  I didn’t know how well my body would recover, what it would feel like, and if I’d even be able to run later.  But I didn’t have time to think about it because we had to rush off to our next exchange point.  Runner #3 was running back along the same route I’d run on, but her end point was right along Lake Dillon.  It was gorgeous! 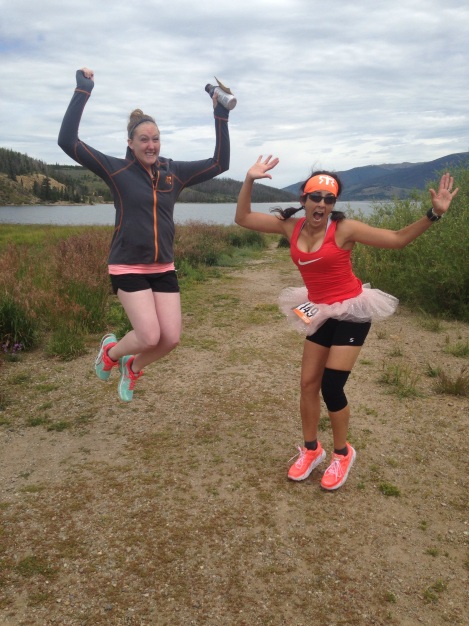 After she ran in, we drove off to meet runner #4.  At this point we had access to a real bathroom in an outlet center, so I got to clean up at bit and change my clothes which was the best feeling EVER.  While runner #5 was running we found a spot to pull over and cheer her on, which was hard to do for most legs on this course.  The views in Frisco were awesome and I was so excited to be running in such a beautiful place.

Once we met up with runner #5, we headed to our first major exchange point back in Copper Mountain.  There was basically a giant party with lots of swag and food for sale.  Once runner #6 ran in at 3:00 pm we were done until 8:15 at night! 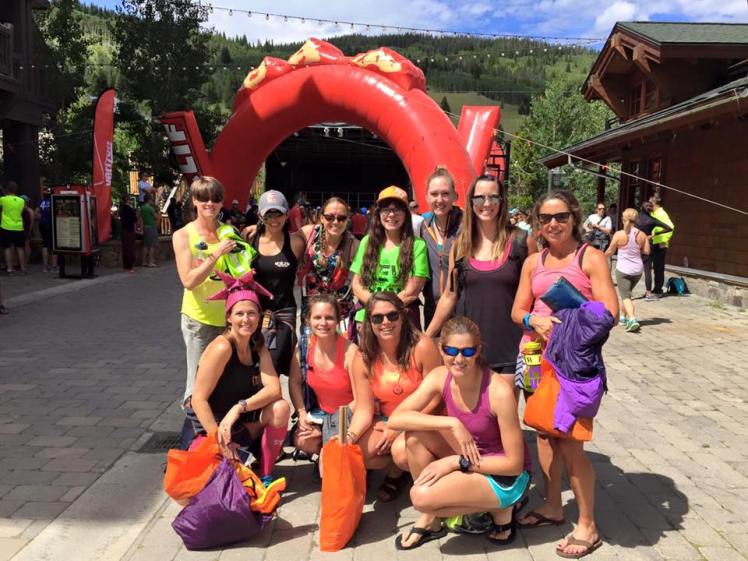 Our team in Copper Mountain minus runner #6

Our first order of business:  FOOD!  We found a pizza place and I literally asked the pizza guy to give me the biggest slice he had.  And he didn’t disappoint!

After eating, we drove out to the next major exchange to rest for a few hours.  We got to use real bathrooms again and some people napped on the floor of the rec center.  But I was too busy taking awesome sunset pictures to sleep at all! 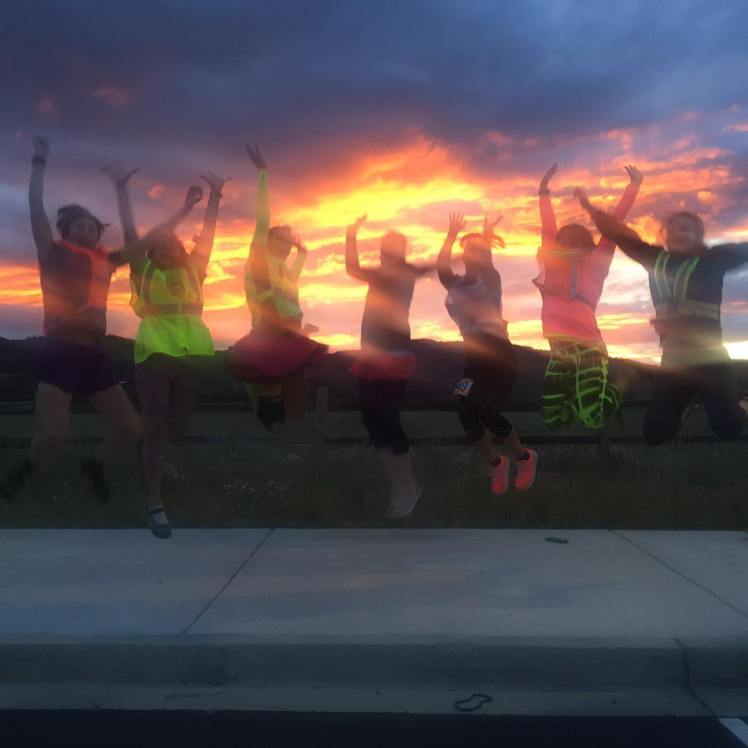 The sunset + our reflective vests = one awesome picture!

And once the sun set, it was time for our second legs!  I was feeling much better than I’d expected, and really enjoyed the cool evening weather and the fact that I was now only 7000 ft above sea level.  I headed off a little before 9:00 pm decked out in full safety gear.  Our van driver wanted to run at night too, so she joined me on my leg.  While I was kind of bummed to not get the full “running alone at night” experience, it was nice having her there so I wasn’t alone.  My second leg was 3.8 miles, and most of it was downhill.  It turns out that elevation only affects you when you’re running flat or uphill, and I was doing amazing on my second leg!  I was running some parts of the course in sub-10 minute miles and ended up coming into the exchange point 1 minute per mile faster than I’d planned.  I was so excited!  I even got to see the Milky Way as I was catching my breath back at the van.  It was the coolest feeling ever and made me realize that I love running downhill at night under the stars!

Honestly, after wiping down and changing into my running clothes for the next morning, I was pretty beat.  I started dozing off around midnight and woke up just to cheer my teammates on at each exchange (and to drink tons of water!).  Around 1:00 we were finally done running and we headed off to exchange #24 for a few hours of…sleep-ish.  Half of our van attempted to sleep on a wooden gym floor, while me and two other team members chose to sleep in the van.  All I had was a thin blanket so even though I had to sleep sitting up, it was more comfortable than the hard floor!  We woke up at 5:00 am and I could tell that this was going to be the hardest point of the whole entire relay.  We were all tired and stiff, and too exhausted to even attempt to shower (plus the lines were pretty long).  We all tried to eat breakfast as we sent our captain off for her last leg of the race!  I didn’t start until around 6:30, and all I knew was that I was running 5.1 miles.  As we drove to my exchange, I learned that I was near Carbondale and that my leg would be on a dirt road…and it would be hilly.  I seriously had no idea what was coming!

All smiles heading into leg #3!

Before running I was actually feeling pretty good and was really excited about the gorgeous landscape around me.  But once my leg started, I quickly realized that this leg was going to be super tough for me.  Most of the first 4 miles were uphill – a constant, steady uphill climb with a few flat parts in the middle.  After trying to run the first two hills and ending up gasping for air, I decided to conserve my energy (and breath) and power walk up each hill instead.  I was moving at a 15:00/mile pace, but ran up any flat or mildly hilly part to try to get it back down.  And everyone around me was walking too!  Although during this leg, I only saw about 6 other runners.  It was such a quiet and beautiful run, and even though it was really hard I did everything I could to enjoy every second of it.

At the top of a very long, very brutal hill, I discovered two things:  the start of a 1 mile downhill portion to the exchange point, and this infamous sign! 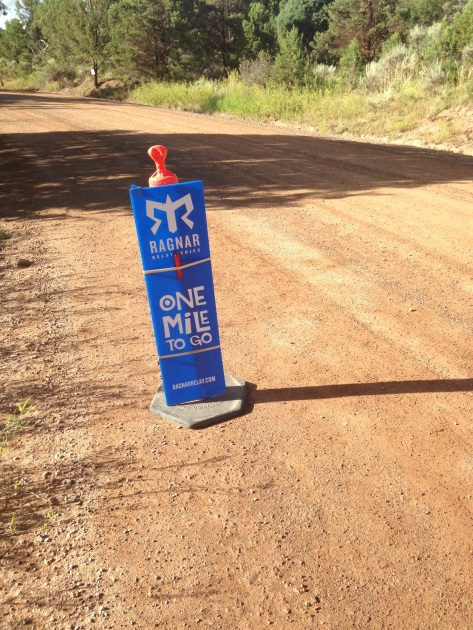 I was so excited to finally be flying down hill at top speed with no breathing issues.  And once I handed off the bracelet to runner #3, it was time to celebrate.  I was finally done! 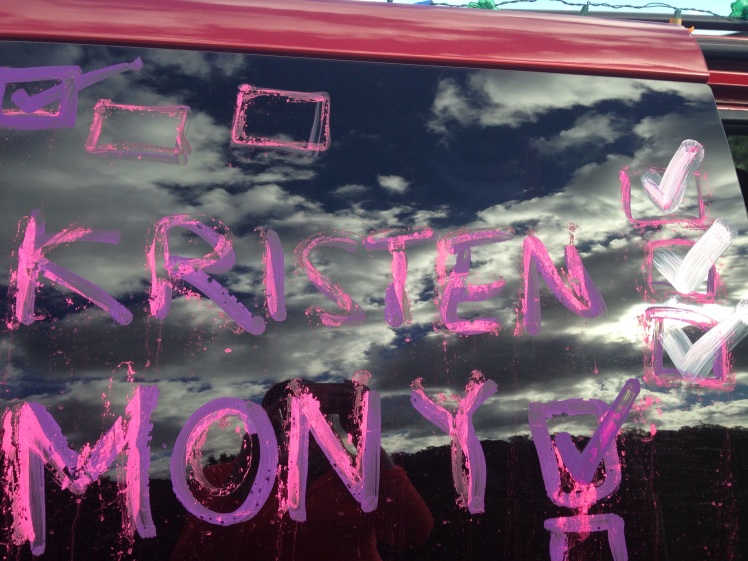 Checking off my final leg on the van!

After a quick clean up in the van and an outfit change, I was feeling awesome!  I managed to cheer on every single one of my teammates while eating as much recovery food as possible.  And at 11:00 our van was done and it was time to finally eat our first real meal of the day!  We chose a place that served breakfast until 1:00 and I can honestly say I’ve never eaten that fast in my life.  After eating we headed over to Snowmass to check into our hotel for the night and to FINALLY shower!  And before we knew it, it was time to head down to the finish line to cheer on our final runner!

My first time on a ski lift!

At about 5:30 pm we saw her heading down the mountain, and team Cirque Du Sore Legs ran across the finish line together.  After 34 hours, 43 minutes, and 27 seconds of running, eating, and kind of sleeping, I was officially a Ragnar Relay finisher! 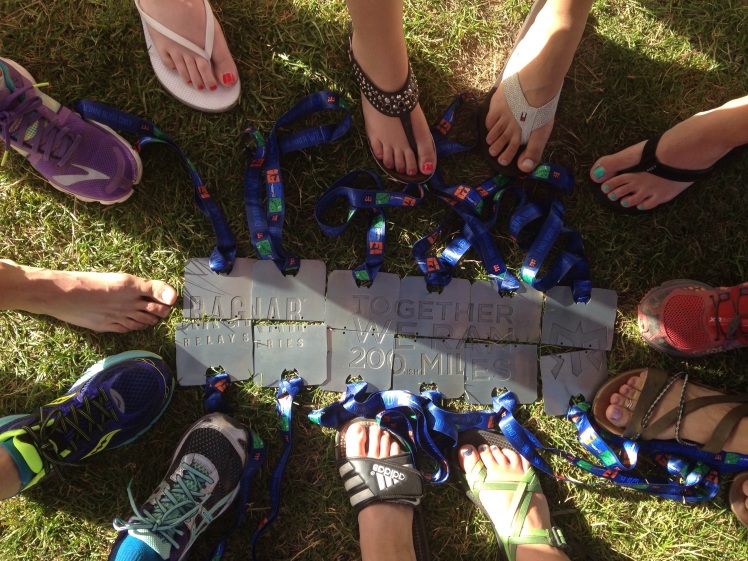 We celebrated with lots of pictures, food, and an early night of sleep.  We even got to sleep in the next day!  And after driving all day in crazy traffic, we got back to Denver just in time to send me off on my 8ish hours of flights home to Anchorage.  And in case you’re wondering, I totally took off work on Monday.  I think I’m still recovering from the lack of sleep and less full meals than usual, but it was all worth it!  I absolutely loved my first Ragnar experience and would definitely do it again!  Next week I’ll share a few more final thoughts on my experience.  But for now, I’m still celebrating!

Have you ever run a Ragnar Relay?  If not, do you want to?  And do you have space on your team for me?  🙂