Hi everyone!  Now that it’s officially spring, I thought I’d fill everyone in on how my first winter in Alaska went.  One of the first things people ask me when they hear I’m from Alaska is “How are the winters there?” with the expectation that they’re always horrifically cold and snowy.  And I kind of feel bad to burst their bubble when they find out that the winter wherever they lived was probably colder or snowier than mine!  I was so nervous about my first winter here after hearing horror stories from so many people…people who live in the Lower 48, not here.  People here seem to love winter and told me not to worry.  And even though I worried a lot, it ended up being much different than I thought!  I’m sad winter is over, even though it wasn’t all fun all the time… 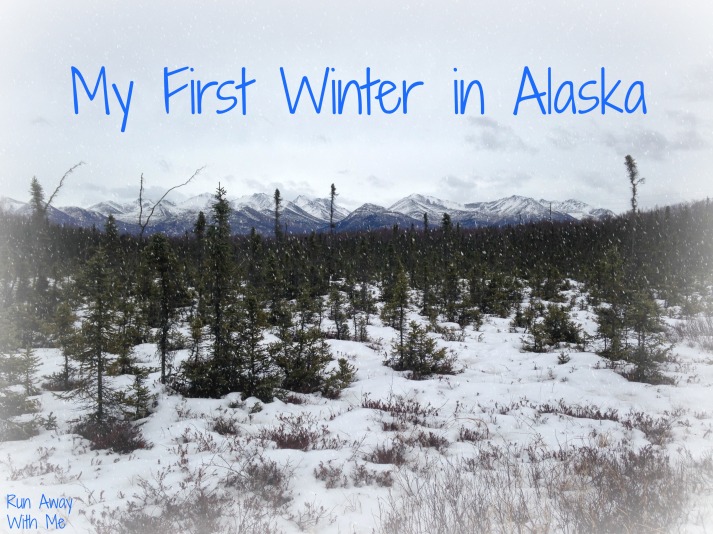 Temperature:  As far as winters go, it was a really mild one here in Alaska.  I know that things have been getting more and more mild here as the years go on, but this one (and from what I hear, last one too!) was pretty strange and I don’t expect this to happen all the time!  We only had a handful of days below zero, including the wind chill.  I have to honestly say that anything below 10 degrees feels the same and it doesn’t make a difference what the thermometer says.  At that temperature, your nose hair freezes and it feels pretty crazy!  But once temps went up into the 20s it felt pretty awesome.  Most days were between 15-45 degrees this winter, which was perfect for outdoor running!  But days under 10 degrees were really pretty because of hoarfrost and ice so I couldn’t be upset with low temps. 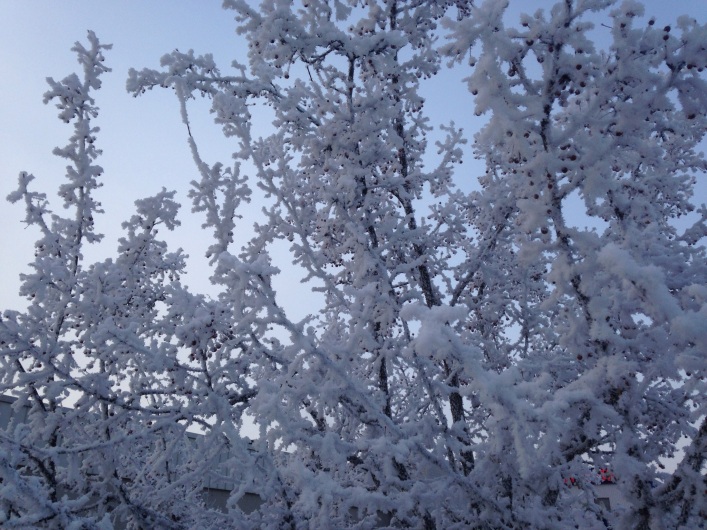 Frosty trees are so pretty!

Snow:  Um, what snow?  Once again, it was a strange winter.  We probably got 5-6 snowfalls this year and the biggest one was around 5 inches.  We didn’t have to use our shovel once!  The ground is frozen and the sun isn’t strong enough to melt anything, so once it snows it stays around for months before melting.  The cool thing about snow in Alaska is that there’s no panic mentality about it, and it becomes totally normal.  Most people love when it snows, including me – that’s a big reason we moved here!  The roads are frozen so they are safer to drive on with a thin layer of snow on top, especially with our studded tires.  Without snow, we had many days with super icy road conditions that were pretty dangerous.  I was told by many locals that this kind of winter is harder to drive in than a snowy one because of all the rain and ice, but I made it through it!

Hiking on my first White Christmas!

Sunlight:  Full disclosure – I thought this would be the easiest thing about winter.  It was the hardest.  I didn’t understand.  No one really can unless you experience it.  On the shortest day of the year, the sun was up roughly 5.5 hours.  And by “up”, I mean that it’s low on the southern horizon and appears to be setting all day.  It’s not overhead, and it’s not strong.  Almost all of December it was hidden behind clouds and I couldn’t see it at all.

All of those things combined to give me a pretty wicked case of Seasonal Affective Disorder.  I had to use my HappyLight daily at work as well as take vitamin D pills, but I learned a few months ago that I wasn’t taking nearly enough and had to take 5 times the recommended amount!  I spent about two months out of the winter feeling tired and sad constantly, taking naps every day, feeling extreme exhaustion after every run (even short ones), and losing all motivation to do anything.  It was really hard, and pretty scary.  Now that the sun is up overhead again and stays around for almost 13 hours a day (currently 7:30 am -8:30 pm) I’m feeling so much better!  Seriously guys, SAD is no joke and if you think you have it you should definitely take vitamin D pills.  And don’t come to Alaska in the winter  🙂 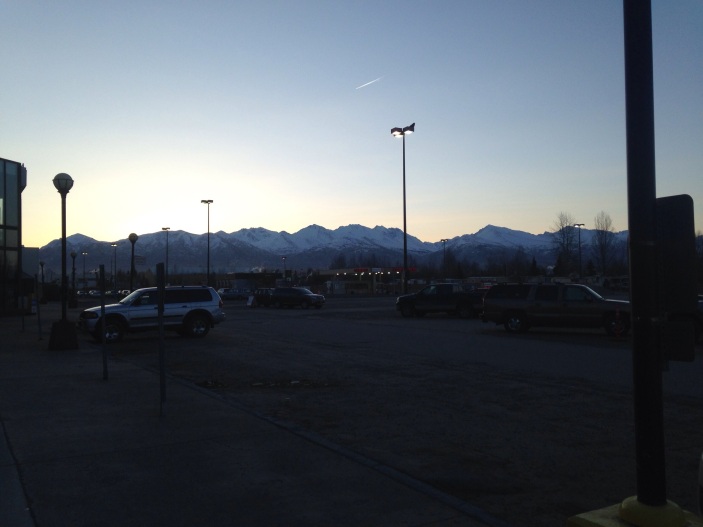 The sun rises late, but when it does it’s so beautiful on a clear day!

Running:  Once I got my shoes studded I had no problem running along in the snow!  Ice was not my friend though, so most of January and February was spent on the treadmill because I was recovering and didn’t want to mess up my hips with a fall.  I also personally draw the line at running in temps colder than 10 degrees because it just really hurts my lungs and is too painful for me.  But most runs this winter were outside with gorgeous views!  Snowy runs are my favorite!

Running along the coastal trail!

Other winter notes:  I thought there would be waaaaay more stuff to do here at Christmas, but the situation was pretty weak.  People here just don’t decorate like in Philly.  But it’s okay, because the night sky is lit up a lot!  It’s not visible every night, and you need to leave Anchorage to get a good view.  But this took up a lot of my winter weekends: 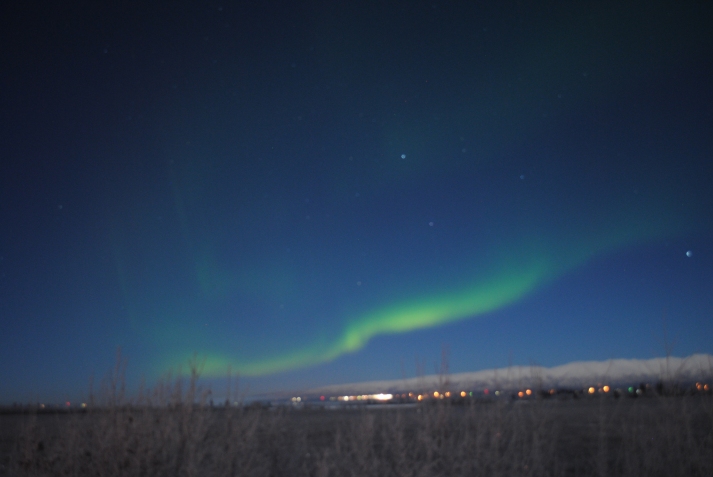 Oh, and I hung out with a moose at my office that one time.  We had a wall between us, but I was still able to take the almost impossible moose selfie!

Now that spring is here, I’m looking forward to hiking everything in sight as soon as the leftover snow is all gone.  I am already planning day trips to Talkeetna and Seward (watch out Bixler and Krystin!) and hopefully to some new places in Alaska too.  Today it was t-shirt weather again and I feel like short weather is right around the corner!

How was this winter where you lived?  Are you a winter fan or are you glad it’s over?

15 thoughts on “My First Winter in Alaska”