Hi everyone!  Time for another update on what we’ve been doing in southern Utah during our Zion Half Trip (if you missed my race recap, go here.  If you missed our day trip to Bryce AKA wannabe Mars, go here.).  On Monday, Andrew and I decided to do the craziest, most difficult and terrifying hike we’ve ever done:  Angels Landing.

Yes, the trail runs along the top of that from left to right.  Ahhhh!

Why did we decide to hike this 5,790 ft mountain 2 days after I ran a half marathon?  Because Vacation Races, the company that hosted the Zion Half Marathon, offers a challenge to runners.  They have a list of post race challenges on their website, and this is the most difficult one:

“The Angels Club is a salute the hardcore among us. I want to reward anyone who hikes Angels Landing after the race. Any runner who sends me a picture of themselves at the top of Angels Landing within 72 hours of the end of the race which includes:

Will join the Angels club and will forever be immortalized on our website. We will post all those pictures here along with the runner’s name.  Additionally, those runners will get 50% off the next year’s registration.

*Every year, several people die hiking Angel’s Landing, largely due to not fully appreciating its dangers. Please take the hike seriously, and do not act irresponsibly if you decide to attempt the hike. It is not intended to be accessible to everyone.”

I’m not exactly sure if I’ll be able to run the Zion Half next year, but something totally made me want to complete this challenge and earn a place on their website.  I love hiking as much (maybe more!) as running, and I love the challenge that hiking presents.  It’s physically and mentally hard, but just spending time in nature in a beautiful place makes the effort worth it.  Plus most hikes have an aspect of going somewhere and seeing something that most people never get to experience, and I love that!  So even though I knew this hike would be a challenge, I was all about doing it within 72 hours of the race.  I mean, I hiked The Beehive at Acadia National Park which had metal rungs attached to the cliffs to help with climbing, how much worse could this be (foreshadowing alert!!!!!).  FYI this is the number one ranked thing on TripAdvisor to do in Zion, and probably the most popular hike in the park.

Andrew and I arrived at Zion around lunchtime and struggled to find a parking spot.  They have very few places to park at the entrance, and since peak season started on Monday we had to take a shuttle into the park along the scenic drive.  We had to take two shuttles to reach The Grotto, which was the starting point to the hike.  We ate lunch in silence while staring at the peak of Angels Landing.  It was so big and the trail looked ridiculous.

At the beginning of the hike I was having a blast!  We were walking along the river with beautiful views of the canyon and the occasional cactus.  I’ve never seen one in person before so I was excited!  Andrew was super nervous and wasn’t really talking.

But soon the trail turned into switchbacks that were carved into the cliff, and they were in full sun.  And did I mention that it was 80 degrees?

We were melting after only 20 minutes and I was concerned that the heat was going to keep me from finishing the hike.  This hike should definitely be done in early morning or later afternoon to minimize the heat.  But we eventually made it to Refrigerator Canyon, where at least there was some shade and a flat trail!

Then we went up some really short, steep switchbacks called Walter’s Wiggles that seemed to go on forever.  We were gasping and sweating and taking so many breaks because of my tired race legs…and then we were finally at the top of Scout’s Overlook!  This is the end of the “normal hike” and the beginning of the part of the trail that I was afraid of.  The rest of the trail to the summit runs along a very narrow ridge with sheer cliffs on either side that drop 1,200 feet.  At some points it’s only wide enough for one person, and there are chains most (but not all) of the way for people to hold onto.

Note:  after I hiked the trail I was googling it and found this article about a death on the trail.  What really hit me was the comments – especially the ones where people almost fell or actually witnessed someone fall.  I don’t think I would have hiked the trail if I would have read these things beforehand.  This trail is no joke and if you’re not comfortable with heights or confident as a hiker DO NOT DO THIS HIKE.  There is no margin for error up there.

Anyways, I’m not afraid of heights and I’ve done things like this before so I figured I could handle it.  So I started the trail and was immediately overwhelmed by how terrifying it was.  There were sections where it was hard to get good footing because the cliff was on a slant and where there were no chains and I had to rely on my very minimal rock climbing skills to pull myself up.  After a few minutes of climbing we reached a large flat area which I mistakenly thought was the top.  Nope, this was the top:

I almost started to cry when I saw that.  I was staring at all the tiny people on completely vertical thin sections and I just knew I couldn’t do it.  I’ve never turned around on a mountain but this was too much.  I’m not afraid of heights, but I’m afraid of dying.  And The Beehive in Acadia was nothing compared to the length of this!  It was at this point that we met a lone woman who was also considering turning around.  Her husband was afraid of heights so she was doing it on her own and was having second thoughts.  But after about 5 minutes we all decided to keep going.  She stuck with us for the rest of the trail and we bonded over the experience!

Hanging onto chains and not looking down.

After struggling through the terrifying first section, the rest of the trail was actually much better.  It was wider and many sections had a cliff you could lean on/use as a handhold as you made your way up.  I was sweating and tired but I booked it up there as fast as I could.  And it was honestly worth it when I saw the views from the top! 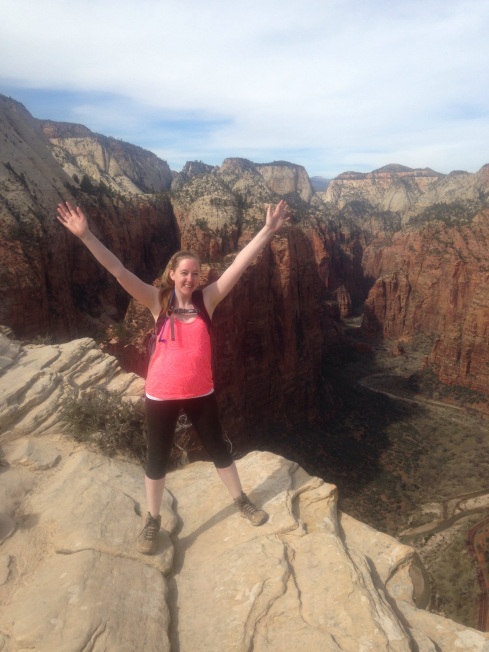 I couldn’t believe we made it!  I got pretty emotional up there.  Andrew said he’d been having some heart issues near the top with his heart beating faster than normal, and I’d been feeling really shaky from some mini anxiety attacks on tough parts of the trail.  So we spent a while at the top enjoying the view and letting our heart rates go down!

I also made sure to take my picture for the Angels Club!

Our descent was way easier than I anticipated, and I butt-scooted my way down some tough sections and tried not to look down.

Once we reached the flat area where I almost gave up, I saw a girl who was clearly thinking of doing the same.  I cheered her on and she decided to head up there!  I loved all of the camaraderie that happens on a tough hike – I met so many people who helped me and I tried to help as many people as I could.  I also told everyone I met that we were all crazy for doing the hike and they agreed!  Overall there were a ton of people on the trail of all shapes, sizes, ages, and abilities that were totally rocking it.  There were people who helped me through tough times and had gone on ahead and were so happy for me when they saw me at the top.  It was like we were all friends up there!  Once we got back down off the mountain after 5 hours of hiking I was exhausted and relieved – but so incredibly proud.  I don’t usually feel invincible after a run, but I always do after a good hike.  I’m so proud of us for doing it!

So happy I did this!

Would I recommend this hike?  Yes, if you are not afraid of heights and are mentally and physically strong enough to handle it.  Although I will never, EVER do that hike again.  It was hands down the craziest thing we’ve ever done, and I hope we don’t ever do anything like it again!  If you want to see what the hike is like but don’t want to do it yourself, check out this time lapse video of the tough part of the trail that I found on Youtube!  It’s only a few minutes long but perfectly shows what we went through!

What’s the craziest thing you’ve ever done?  Have you ever hiked a trail like this?  Would you join the Angels Club if you ran this race?

13 thoughts on “Zion Half Trip: Angels Landing and the Angels Club!”