Hi everyone!  Week 3 of Zion Half Marathon training is complete…well, as complete as it could be.  At the beginning of the week I was still recovering from a total lack of motivation, but I’m feeling much better now!

Monday:  It was COLD.  Single digits give me trouble breathing so it was a yoga day.  I started Yoga With Adrienne’s 30 day of yoga challenge!

Thursday:  I had a guest pass to The Alaska Club, so I went for a treadmill run at the Alaska Club For Women – 10 easy/15 steady/5 hard/10 easy.  During the 5 minutes of hard running, I started to feel pain on the back of my leg behind my knee but kept running through it.  It felt better on the easy 10 minutes, so just ignored it.

Friday:  I woke up with the most terrifying pain on the back/side of my knee area on my right leg.  I immediately freaked out – it even hurt to walk!  I did so much foam rolling and icing at work, and my coworker gave me peppermint oil to mix with lotion to rub on the area.  By the end of the day the pain was fading, but I decided a rest day was in order.  No yoga or running for me.

Saturday:  I had my Intro to Yoga workshop!  It was an hour and a half of slowly breaking down sun salutations A and B, which is something that I was really excited about.  I learned a good modification for chaturonga which is awesome!  And I also didn’t feel like the biggest rookie in there and actually had a good time.  My plan was to run after the workshop, but I could tell that I was totally wiped out from the yoga and I still had occasional twinges of behind-the-knee pain, so I opted to skip yet another run.  This turned out to be an awesome idea because about 1 hour after yoga I got this crazy feeling like a runner’s high – is there such thing as a yoga high?  It was cool to experience that and know that I could get a happy post-workout feeling without any running!

Sunday:  I went for a hike to Thunderbird Falls with Andrew!  We had yet another heat wave this week so it was definitely time to get outside.  The falls ended up being pretty iced over, but it was really nice taking a 2 mile walk with Andrew in the frosty woods!  I don’t think the sunlight reaches this area yet (it’s on the north side of the mountains and the sun isn’t high enough in the sky to get over them right now) so everything was super icy and pretty! 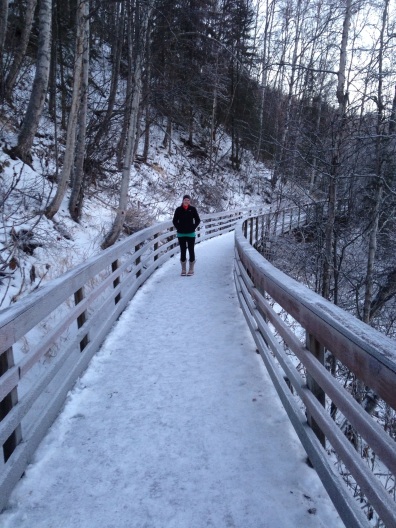 After the hike, I went to my new gym for the first time and ran an easy 55 minute long run.  My knee had no pain at all, which is a win!  And then I attempted yoga, but my arms and abs hurt so much from Saturday’s workshop that I just couldn’t get through it.  Holding positions for a long time while the staff members came around to correct each of us really took a toll on my wimpy upper body and core!

Even though I only ran twice and couldn’t exactly keep up with the yoga every day, I’m feeling okay about last week.  I got my motivation back and ended with a strong run, so I’m optimistic about this week’s training.  And I even tried my first studio yoga class, which is an incredibly huge step for me!  I’ve been missing Barre3 so much – not just the exercise itself (which is awesome by the way), but the feeling of signing up for classes, going to a calm and relaxing place, and getting in a good workout.  While I liked the studio where I took the yoga workshop, I do think I want to try a few more studios before I commit to anything.  The studio definitely had a heavy focus on hot yoga, arial yoga, pole dancing, a makeup studio, and a lash bar (what?), so I’m going to try out studios that are completely focused on yoga next.  I don’t know what’s going on with me, but I might just get back into studio classes!

And now for the gym situation – as you could tell from last week’s post I was all ready to join The Alaska Club which offers tons of perks like workout classes and a women’s gym right across the street from me.  So I showed up for my free trial day, and expected to be totally blown away by their service and attention to detail as they tried to convince me to drop like $100 a month at their gym.  What I got instead was a girl who had no idea how to sign me in, a really half-assed tour of the gym, and when I inquired about joining I was simply told that she didn’t do that stuff and I’d have to talk to someone else.  I ran on a nice treadmill while watching HGTV which was great, but I left and honestly felt that even with all of their classes I didn’t need to be spending a crazy amount of money every month to go there, especially over the summer when I’d only use it on rainy days.  So I talked to my coworkers and decided that I was going to join a much cheaper gym.  Any guesses to which one it was based on the colors?

That’s right, I chose Planet Fitness!  Overall, one year will cost me $150.  There are no classes, but they do have tons of treadmills and TVs and are apparently a judgement/lunk free zone.  I’m so excited to finally have a backup plan for running!  I’ll never be able to use weather or the sunlight as an excuse for missing a run, and I can finally run after work again without sneaking out early!  And I won’t feel bad going less during the summer paying $10/month.  So overall, it was a great week!  For this week, I want to get through all four of my runs and I also want to get back on track with the 30 Days of Yoga Challenge.  In fact, I was thinking today how sad it is that I had to skip a day to rest my leg, and how much I want to say that I’ve done yoga for 30 days in a row.  So I decided to basically start over this week, and I’ll count either Yoga with Adrienne or any studio classes for 30 days.  I’m hoping to get myself to one more studio class this week too which is totally unexpected.  Yay for finding my motivation again!

How was your week in workouts?  How do you feel about studio yoga classes, and how often do you take them?  And is there anyone else who belongs to Planet Fitness?

23 thoughts on “Week Three of Zion Half Training!”