Hi everyone!  Sorry for the lack of half marathon training plan posting yesterday but…I don’t really want to talk about it right now.  I feel like I’m definitely going through some kind of lazy spell right now and I have totally lost all will to do anything except watch Kourtney and Khloe Take the Hamptons.  It’s almost as if everyone’s goals and resolutions are sucking up all of my motivation!  Oh, and the weather got a little crazy here too:

This is my current weather, which is actually warming up (as you can see it will be raining this weekend instead of snowing, WHERE IS THE SNOW ALASKA!) but it’s still a giant leap from the 20s and 30s that I’ve been running in all winter long.  I shouldn’t complain since this is the coldest it’s been since probably 2013 and it’s not as bad as some places in the US, but it’s still pretty rough to get used to.  This weekend it was in the single digits and it was so cold that I was literally coughing when I took a breath and my nose hair froze, which is apparently a thing here.  I went for a run on Saturday and my legs were so incredibly cold that I just couldn’t bring myself to do it again on Sunday.  And Wednesday’s rain and then the drop from 43 degrees to 3 degrees caused some crazy ice on the ground that was pretty scary to run on.  I’ve been avoiding the fees for this long but I really do think it’s gym time now  😦  Even though I know have to battle for a treadmill with all the resolution people at the gym.  I’m hoping I can still do most of my runs outside this winter, even though it hurts to breathe and I run the risk of falling on ice.  But on the bright side, it’s still consistently warmer here than in Wisconsin where my sister lives!  And when it’s this cold out we get awesome things here like the northern lights, crazy ice trees, and incredible sunsets!

Aurora over Wasilla at 12:30 am Sunday morning.  We watched it for 3 hours!

In hiding-from-the-cold news, I’ve gone over to the dark side and will most likely be signing up for the gym monopoly in Anchorage, The Alaska Club.  I have no idea what terrifyingly huge monthly membership fee they will make me pay but everyone says they have the best classes in town which I think will motivate me to go  more.  There’s also Planet Fitness for $10 a month but they don’t have classes, there is not one single spin studio in Anchorage for me to join for occasional classes, and yoga classes at studios are crazy expensive.  So I guess it’s worth it.  I’m going to be trying out a day at the gym with a guest pass this week and will let you know if they won me over!

While my motivation seems to have disappeared with the sunlight here, I have taken some time to make a few goals for 2015 that haven’t totally overwhelmed me.  You can check out my New Year’s Friday Five post here, but I’ve got a few more to share: 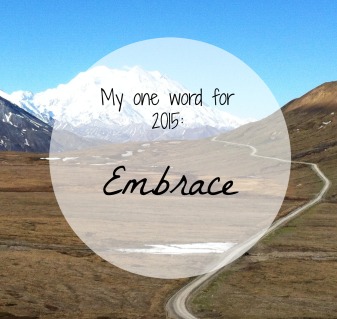 Here’s the definition of embrace from dictionary.com:  to accept an opportunity, challenge, etc. willingly or eagerly.  Why this word?  Well, this year will be our first full calendar year in Alaska and we want to make it the best year ever.  There are so many things we want to try here (hence my “Alaska cross training” goal) and most of them are kind of intimidating and intense.  I mean, climbing one of the 3,000 ft mountains that borders the city isn’t exactly normal cross training in the summer, and skate skiing isn’t normal for most people in the winter (fun fact:  it’s not like we can do it now anyways since all our snow melted into an ice sheet.  Blah.).  But despite how much of a rookie we are at all things Alaskan, we want to embrace every part of living here.  We want to have no regrets this year, and it means spending less time watching Parks and Rec on the weekends and more time learning how to ice skate without breaking our ankles.  My only rule is to embrace safely – no need to fall off a mountain, wipe out on ice, or get frostbite just because we have to get out there.  But we’re looking forward to embracing our new lives more in 2015!

Did you choose a word for 2015?  Are you having colder weather than usual?  How do you make yourself run outside in single and negative temps?