Hi everyone!  It’s my first blog post of 2015!  Woohoo!  I’ve had a pretty busy week and I’m excited it’s over honestly.  My friend was in town from Bethel and we did lots of post-Christmas shopping, running, and other fabulous Alaskan things.  One more day of work and then I have the weekend to recuperate!  New Years Eve was definitely different out here in Alaska than in Philly.  First of all, it was 43 degrees!  It was only 21 degrees at my parent’s house which is pretty crazy.  I had to work, but I left at noon and went shopping with my friend. We found ourselves in the gun section of Walmart…and I ended up buying my very first gun! 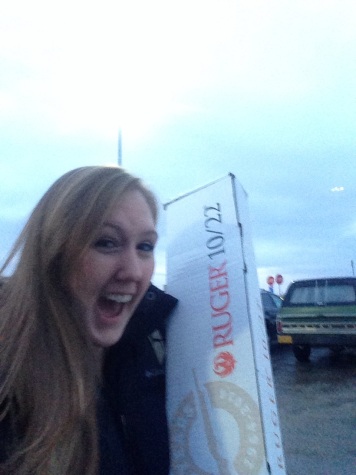 We’ve been thinking about getting one for a while – I felt really weird doing it in Philly where I felt like it was totally out of the question to ever shoot at a range for fun, but up here it’s totally normal.  My students go to the range on the weekends, and it seems like everyone has at least one gun.  I’ve been talking to a lot of people about what I should get, and it turns out that this is the “starter gun” of almost everyone in Alaska.  And it’s the first gun my dad ever shot (when he was 12) so I think it was a good choice!  There’s a shortage on .22 ammo up here so we’ll see if I can ever get a chance to use it.  Sorry if you’re anti-gun, that should be the last time you hear about it but I was too excited to not mention it.

After we finished shopping we got dressed in some obnoxious neon clothes for the Northern Lights Resolution Run AKA my 14th race in 2014!  The run is at night and the course was lit up with lights every half mile (sadly, no actual northern lights made an appearance).  We decided to go overboard and cover ourselves in lights too.  I also ran my first race with my new headlamp and it wasn’t too uncomfortable. 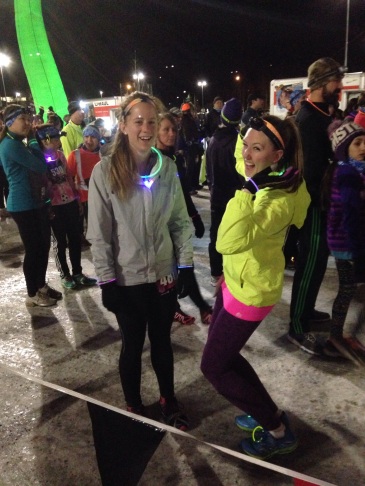 Clearly spelling out “15”.  Except that my knees don’t bend that way!

Since it was over 40 degrees, we had rain instead of snow.  And since the ground is frozen, that rain turned into ice when it hit the ground.  So it was a slippery mess of a race course.  It wasn’t my slowest 5k, but there was so much time spent walking just for our own safety.  At one point everyone stopped and there was a huge wait time for us to move forward because there was a super slippery spot on a hill where everyone had to take it really slow.  But honestly, it was such a fun race!  I loved seeing everyone’s awesome outfits and crazy ways they were lit up, and I had so much fun running through all the different light stations along the course.  Since we were out in the woods for half of it I was glad I had my headlamp too.  It was definitely a fun race and I wish we hadn’t been timed because there is no way someone can race through a fun slippery course.  Also, it was SO HOT running in above 40 degree weather!  We took our gloves off after it stopped raining and I was dying in my short sleeved shirt and lightweight rain jacket. 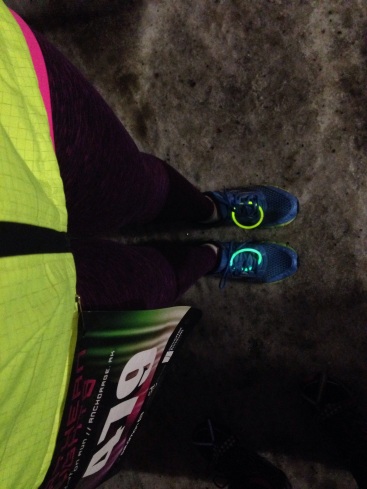 Lighting up with tons of glow sticks wherever I could stick them, and a super obnoxiously reflective neon jacket! 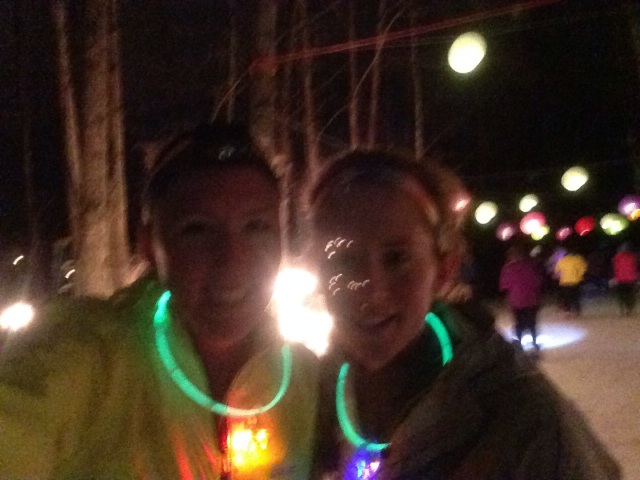 Running through a light station on the course!

After the race we celebrated with Chipotle!  Oh wait, we don’t have Chipotle in Alaska, right?  Well Andrew spent all day cooking a recipe for fake barbacoa tacos and it was so good!  At 8:00 pm we watched the ball drop on the east coast, and it was really overwhelming and strange.  I didn’t expect to get homesick, but I definitely cried a bit when I realized that everyone I love was celebrating in 2015 and I was just eating dinner in 2014.  Hopefully my homesickness is all out of my system by now!  We had a fun night at home playing drunk Mario Party, and re-watched the ball drop at midnight and pretended it was live.  I never thought about what people on the west coast do at midnight, but it’s so bizarre that everyone watches a 4-hour-old celebration!

Now for the fun part!  I had a blast recapping 2014 (go here if you missed it!) and now that it’s 2015 I’ve got to make some new goals!  So I decided to join everyone in the Friday Five linkup with Mar, Courtney, and Cynthia in sharing 5 goals for 2015.  I’m sure that if I really thought about it I’d have a ton of goals for this upcoming year, but to fit it into this post I’ll make it 5: 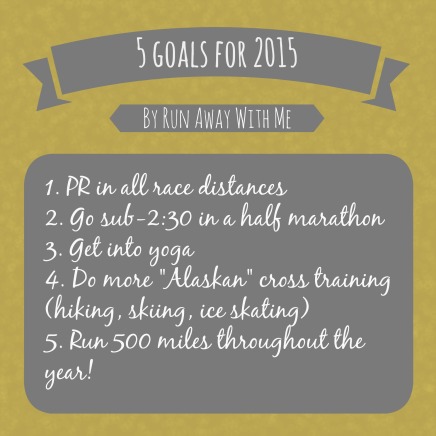 I’m sure you’ll be hearing more about these goals in future posts.  I hope you all had a great New Year’s celebration and are enjoying 2015!

How did you celebrate this year?  Any fun resolution races?  And what are your goals for 2015?