Hi everyone!  Sorry for the longish break in posts, but I’ve been so busy at home!  Between visiting our friends in Philly, seeing Andrew’s family up in Bucks County, and staying with my parents in Reading we’ve been all over the place.  And it’s kind of weird.  I mean, I love Alaska and I’m happy there.  But part of me is sad at all of the things I gave up and it’s been making me want to come back.  Between grad school and the different jobs I’ve had, I’ve been all over the northern and western suburbs of Philly as well as all over the city.  So it’s really weird going back and remembering what it was like to live here.  I grew up dreaming about living in a old, pretty stone house in the countryside surrounding Philly (Doylestown, King of Prussia, or Exton in particular!) but those kind of houses don’t exist in Alaska.  I always dreamed of being able to afford Flyers season tickets, but now I live in a place where they don’t even show Flyers games on TV (and we won’t have cable anyways).  I had a perfect little family with my puppy Bella, and now she’s not able to join us in Alaska and has to stay here with my mom.  It’s been a total mess of emotions being here.  After days of randomly crying over stupid stuff, I’ve realized something:  this is no longer my home.  I have no idea where I’ll end up in life, but Philly probably isn’t it.  And I’m not even missing some stuff that I had – I’m missing hypothetical things that I wanted and now can’t have if I live in Alaska.  I was pretty miserable in Philly towards the end of our time there so I don’t know why I’m feeling like this.  Moving is such an emotional experience and I had no idea how much it would affect me! 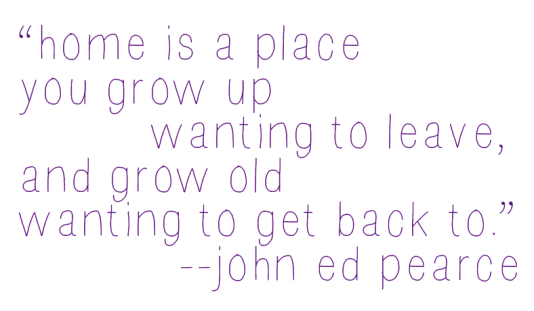 Really, I just think this is a confusing time.  We haven’t moved into our place in Anchorage yet, so we don’t really have a home at the moment or know what to expect in the upcoming winter.  I feel like I’m stuck in between what I’m imagining Anchorage to be and what I know Philly is.  And I’m letting my fears take over and cloud my perception about home.  But let’s be real here, life in Philly was not perfect.  If I still lived in Southeastern PA, I would have:

So really, I’m not missing much.  Anchorage might be one big question mark for me right now, but at least it’s a new place full of possibilities.  We’ve already got friends there, I’m going to join a large and active running club, I can walk to the coastal trail for awesome running, and we live in a busy part of town with lots of fun places within walking distance.  Oh yeah, and the mountains are right there!  So even though it’s going to be tough to say goodbye to my family (I’ve cried a few times already), I know it’s the best choice for now.  I’ve got an awesome new home to get excited about!

Have you ever moved away from home?  Did it feel weird when you went back?  What do you miss the most about home?