Hi everyone!  It has been a week since my last post, and I’ve been busy!  Greetings from sunny, HOT (yes 70 degrees is hot for me now!) Seattle!  Andrew and I will be here until next Tuesday so we can visit his dad, hike in some national parks, get a PSL at the first Starbucks, and run the Beat The Blerch Half Marathon on Saturday!  Sunday was the last day of our jobs in Seward and we had to move all of our stuff to a storage unit in Anchorage on Monday.  Leaving Seward was so hard.  It was the best summer of my life and I’m going to miss my coworkers like crazy.  And as for the town itself…there’s nothing more beautiful on earth.

I will miss seeing this view from my office

Between putting our stuff in storage and getting on the plane to Seattle we had a meeting with a landlord to put down a deposit on an apartment in Anchorage!  Andrew and I were up there 2 days last week looking at places and with our tiny price range the places were all pretty…interesting.  Homeless people were mentioned in a few of the appointments!  But we got lucky and found a cute little 1 bedroom apartment in Midtown right in the middle of a bunch of restaurants and stores.  We can walk to our favorite restaurant when it’s too snowy to drive!  We are super relieved to finally have a place when we come back up there in a few weeks!

As for the job search, I finally have some news!  I was offered 3 jobs last week and one of them is basically my dream job!  I don’t really want to say the name of the company for the sake of privacy, but it’s a very well known non-profit that works with women’s heath, sex education, and pregnancy and you’ve all heard of it before  🙂  I will be an educator for teens in the Anchorage area!  From what I can tell, I will go into middle and high schools and meet with 1 group of students each day to teach lessons on relationships, sexual health, and pregnancy prevention.  I’ll spend the rest of my days planning lessons, attending community events, and acting as the face of my company.  I’m so excited to finally be teaching – and the best part is that I’ll be making a difference too!  I can’t wait to get started!  The coolest part is that they are flying me to Seattle for training in early October, so I’ll get to come back here in 2 weeks and spend a week learning about my job and exploring the city a bit more!  I’ve never had a company pay to fly me anywhere or pay for a week’s worth of hotels/food, so I can tell it’s a great company to work for  🙂

Now that you’re all caught up, here’s what I’ve been doing so far in Seattle:  eating and running.  I’ve been to both Chipotle and Panera so far and oh, how I’ve missed them.  If those restaurants were in Anchorage I’d be the happiest girl on earth.

Barbacoa tacos are the best!  I might eat these every day that I’m here!

I also finally got around to running again!  It’s been over a week since my last run because I was in Anchorage almost every day last week and whenever I was in Seward I was busy hanging out with my friends one last time.  Training for a race during a big life change is not the best idea.  Anyways, I found out that the Soos Creek Trail is very close to my father-in-law’s house here in Seattle and I set out for a 6 mile run yesterday.  Spoiler alert:  I didn’t see the creek at all.  I don’t think it actually exists. 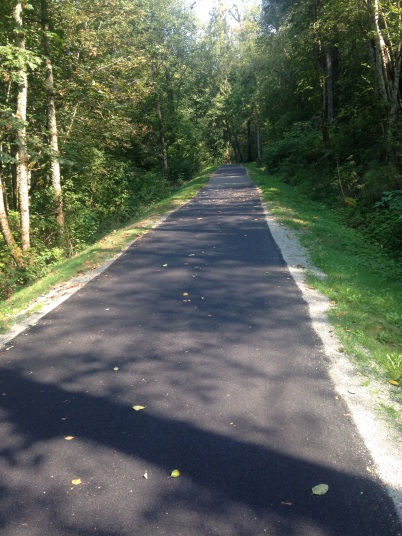 The trail was pretty, but that’s all that was good about this run.  The problem was that I was dehydrated, tired, and not acclimated to the weather at all.  And it was sunny and 70 degrees, which hasn’t happened in Seward in months!  So it was one of the most miserable runs of my life.  I was sweating before I even started running and was thirsty by mile 1!  And the middle part of the run was on a long hot stretch through a field with no shade.  Ugh.

Despite how terrible I felt, I managed to make it through all 6 miles.  I planned on walking home but had to have Andrew pick me up because I thought I was going to pass out from the heat/dehydration.  I’m so worried about Saturday’s race now because it’s going to be in the 70s on that day too!  The good news is that my legs felt great, so I’m just going to pray that it’s cloudy on race day (the weather says it won’t be) so that I don’t feel overheated.  I’m also officially in Operation: Hydrate Like Crazy and that should help get me better prepared for Saturday morning.

My plans for the rest of this week include hiking at Mount Rainier National Park, outlet shopping with one of my coworkers from Seward, hanging out downtown, and getting in one more short run before the race.  Oh and lots of carbs.  Stay tuned for more posts from Seattle!

What are your favorite places to go in Seattle?  Any awesome places I should run while I’m here?

19 thoughts on “Greetings From Seattle!”