Hi everyone!  As you may remember, I recently blogged about Jost Running, a virtual racing website.  I’m super excited to be racing with Jost for the rest of the summer!  The owner has awesomely let me run their races in exchange for my honest reviews on the process.  I was loving the whole process from the moment I first started talking to Cynthia about her company, but I didn’t really have an easy time fitting a race into my schedule until yesterday.  Which was a good thing because yesterday was the deadline for the Brave New Route race!  I decided to run the 10k since yesterday is my day off and is therefore my long run day.

Now even though this wasn’t a “real race” with official timing and mile markers and a finish line, I wanted to treat this race like a real, official race. So I ran with my RunKeeper app to track my time and distance.  I also decided that to give myself the competition aspect of racing, I would take a look at the current leaderboard for the Brave New Route 10k.  There were only 10 other people with submitted times, and the 5th person clocked in at 1:07:27 so I had a goal time to beat!  The tricky part was choosing a race route – part of the Brave New Route race series was finding a new route to run for your race that you’ve never run before.  I loved the idea but in Seward my options for a 6 mile race off trails was pretty slim!  But on Sunday night my husband and I went hiking at Exit Glacier in Kenai Fjords National Park and I’d noticed a flat trail loop that was about 1 mile long, so I decided to head out there for my race.

I had a few goals for this race:

When I pulled into the Exit Glacier parking lot, I was a bit worried to see the parking lot almost full of cars.  That meant a lot of other people (mostly tourists!) would be on the trail as well.  I’m loving the solitude in my after dinner runs, but today it looked like I’d be sharing my route with a lot of people.  But I had a race to run, so after a quick warmup I started off! 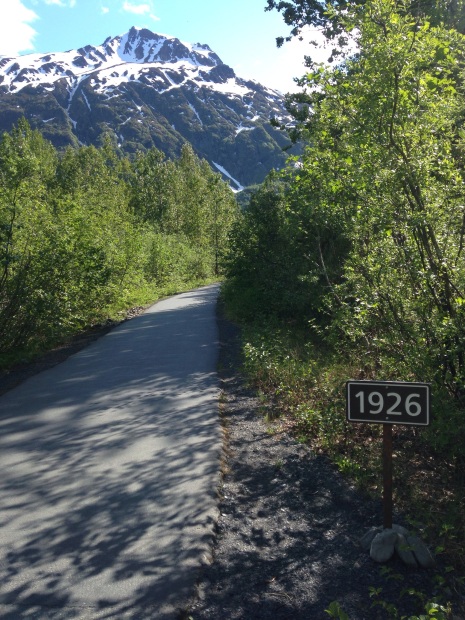 The first .25 miles of the trail was wide and paved.  If you’re wondering what the year means, this is a marker showing where the toe of the glacier was in 1926!  If I was running back then I’d have been running on ice!  There were a lot of these markers on the trails and roads around the park.  They kind of make me sad because you can’t even see the glacier from here since it has receded so much.  I also encountered a lot of tourists on this stretch of the trail.  Most of them looked at me like I was insane, probably because I was running in a place where most people were walking slowly, and I was sweating in a tank top in 64 degree weather.  It did make me laugh to see so many people wearing coats!  Once I got to the gazebo on the left side of the trail I turned left onto a gravel trail.  This trail runs through the woods and next to the river for some incredible views of Exit Glacier and the surrounding mountains!

After running 3 laps on the trail, I started to feel really uncomfortable.  Not only was I really warm and thirsty, I was starting to get way too many weird looks from tourists.  I didn’t realize how terrifying my presence would be on the trail, but for most tourists hearing something stomping and breathing heavy coming towards you in the forest is a pretty scary thing.  I always announced my presence once I got close to people, but most people still gasped and grabbed their young kids before diving off the trail.  The people that weren’t afraid when they heard me coming tried to ask me questions and talk to me, which is nice when I’m not trying to run a race!  So by 3 miles I already wanted to go home.  I tried to figure out how I could get to the “finish line” of the race and decided that maybe I could try running out on Exit Glacier Road where all I’d have to deal with is the occasional car.  After stopping at my car for a quick water break, I was off again!

At first running on the road was awesome – it was so peaceful and I was totally alone.  I started to get into my running zone and spaced out for a while until I realized that I was getting really hot.  There was no shade and I was just dying to be finished!  I told myself I could turn around at the bridge and I’m glad I made it out there because the views were so awesome!

After I turned around, I was finally facing into the wind which helped cool me down a lot!  I also had the glacier to look at for a while.  I was dying towards the end and totally kicking myself for skipping one of my runs last week.  I really need to start running at least 4 times a week and doing some cross training again because 6 miles should not suck this much!  I finally got back to the park and did one last lap of the trail before finishing! 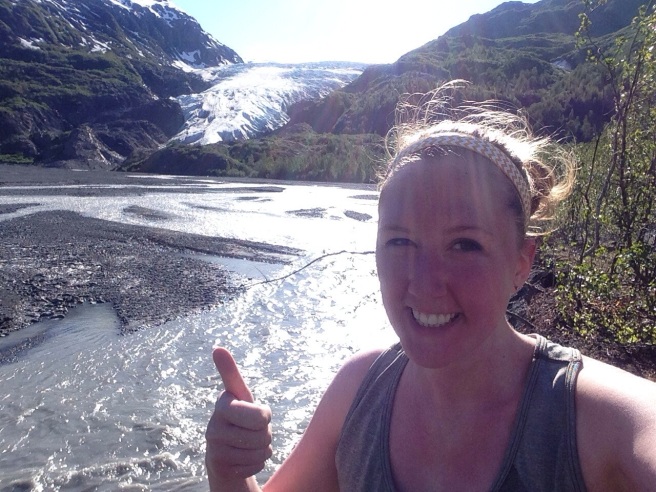 How did I do?  Well I honestly felt really tired, hot, and sick most of the race and didn’t even get to enjoy the scenery with all of the distractions that I had to deal with on the trails.  I will probably only run here again at night or early in the morning so that I don’t have to deal with crowds.  I did survive without any moose/bear attacks and took some pretty sweet selfies so that’s a win!  But as far as my race time goes…

I missed my goal time by only a few seconds!  WHY DOES THIS KEEP HAPPENING TO ME!  I need some help with my speed clearly!  At least it’s faster than my first 10k time so I’m going to say this is okay.  I will be running more of these races in the future and it’s going to be my goal to get significantly faster!  I ran my last 10k back in April 5 minutes faster than this so I can tell that the whole stress-filled process of moving to Alaska really slowed me down.

So what did I think about virtual racing with Jost Running?  I gave it a 5 out of 5!

Overall I had a great time running for Jost Running yesterday and I’m excited for my future races with them!  If you’re in the mood to run a race and don’t feel like dealing with typical race day stuff you should sign up for one!  You can literally run one tonight in your PJs and no one would care.  Also, like I mentioned in the last post about Jost Running, you can skip or run backwards or do something crazy and it totally counts!  I can’t wait until the next race!

Did you run the Brave New Route race with Jost this month?  Where’s your favorite running route?