Hi everyone!  I figured that at least once a week I’d write a post updating everyone on how our moving plans are going.  If you didn’t read my moving to Alaska post, go check it out now!  Andrew and I are still crazy excited about moving, and we spend all day preparing for the move by going through all our stuff, making last minute appointments before we leave, and planning our long drive up there.  And every night, we lay in bed talking about how amazing it’s going to be to finally live up there!  But there are a few rough points to moving so far away.  We’re going to miss our friends and family so much, but there are a few other thing I’m going to miss about living in Philly:

1.  Wawa:  If you don’t know what Wawa is, you NEED to come to Philly ASAP!  It’s like a Seven Eleven, a deli, and a gas station had a baby together.  How can three things have a baby?  No idea, but it happened and it’s called Wawa.  They have the cheapest gas, but they also have the most delicious coffee and deli sandwiches!  Everything is made to order and they use Amoroso rolls (soooo good!).  I probably go there about 4 times a week for coffee, breakfast sandwiches, and their super massive chocolate chip cookies that they heat up in the oven before you buy them.  OMG I’m going to miss this place!  But I may lose weight once I stop eating all that stuff  🙂

2.  Trader Joe’s:  I know this isn’t technically a Philly thing, but they don’t have it in Alaska so I’m pretty upset.  Trader Joe’s has the best food and most of it is organic or somewhat more healthy than the other crap I eat.  Speaking of the crap I eat, I am going to miss Cookie Butter so much!  I may try to get it shipped out to me.  I’m also going to stock up for our drive up there, but there is a limit of 6 jars per customer so I’ll need to be careful.

3.  Chipotle:  I don’t understand why they don’t have this in Alaska since they have a Qdoba, but I actually did cry when I found out they don’t have one up there.  Actual real tears.  I may have been stressed out, tired, and hungry when I found out but that’s still the level of love that I have for those burritos.  I barely ever eat fast food so this officially means I’m done eating out I guess!  Fun fact:  Anchorage also doesn’t have a Panera, a Dunkin Donuts, or a Chick Fil A.  Hmmm.

4.  “Wooder Ice”:  That’s how we pronounce it out here  🙂  Seriously though, there will be no Rita’s or any other kind of water ice out there, so I guess I better start eating regular ice cream more!

5.  Real soft pretzels:  We’re pretzel snobs in Philly and I’m very particular about my pretzels.  I’m hoping they at least have Utz or Snyder’s pretzels at the grocery store so I can have a bit of eastern PA food with me up there.

1.  Ridley Creek State Park: I started running in this park, ran my first 5k here, and even got married here!  It’s a seriously beautiful little oasis 10 minutes from my office and I’m going to miss running there a few times a week.  Although I won’t miss that beast of a hill at the beginning of the running trail…

You can see why I will miss this place!

2.  Being a 2 hour drive away from so many awesome places: Right now I can get in my car and within 2 hours I can be in DC, NYC, Lancaster, the beach, the Poconos, and both my parent’s and my in-law’s houses.  It’s nice to be near so many great places!

3.  Historical locations: As a history major, I’m a big nerd about anything history related.  Which is why I’ve loved living in Philly!  We’ve got the Liberty Bell, Independence Hall, Betsy Ross’s house, Elfreth’s Alley, Ben Franklin’s grave, and so many other awesome places!  We’ve even got Edgar Allen Poe’s house.  Anchorage doesn’t have many historical old sights so I’m going to miss that!

4.  TJ Maxx:  I have no idea how I’m going to buy any clothes or household items up there without TJ Maxx and Marshalls.  Seriously, 90% of what I own has been bought there.  When I come back to visit I’ll have to bring an empty suitcase and stock up!

5.  Being in driving distance of Acadia National Park:  This has nothing to do with Philly except that it’s our big yearly vacation every year and I’m beyond obsessed with Mount Desert Island and every mountain/lake on it.  In fact, when we visit in the fall I’m trying to convince Andrew that we should drive up there for a long weekend. 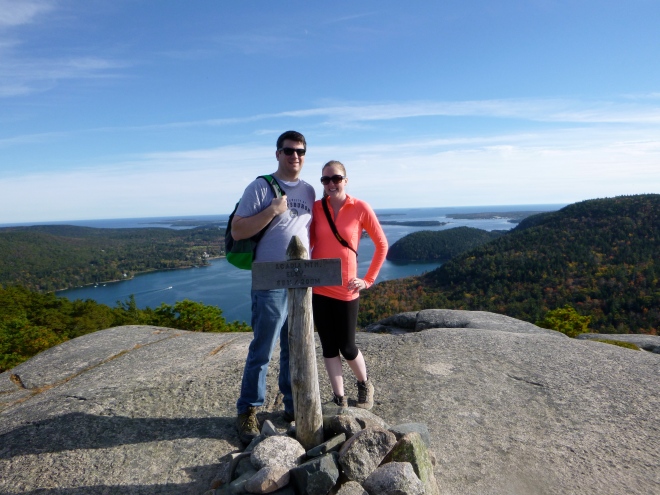 1.  Broad Street:  In case you didn’t do the math, I’d like to unfortunately announce that I will be missing the Broad Street Run on May 4th.  I’ll be up in Seward which is awesome, but I’m really upset I won’t get to participate in this race since it’s been a goal of mine for years and I actually got in through the lottery!  I guess I’ll have to fly back one year to run it!

2.  The Schyulkill River Trail:  I love running on this flat trail because it’s pretty, populated enough to not creep me out when I’m alone, and helps me do my long runs off of the treadmill.  It’s also fun for hiking, especially in Valley Forge National Historical Park!

3.  Forbidden Drive:  I’ve done some of my best runs on this trail.  It’s so pretty and there’s even a covered bridge!  There are lots of fun trails going up the hills that I’m too klutzy to run on too.

4.  Cool races like Run The Bridge and the Hershey 10k:  I would run those races every year if I could!  I know Alaska will have tons of great races but none that take place in 2 states or run through an amusement park.

5.  Not worrying about moose and bears while running:  I’ve had some close encounters with deer, but I’m not sure what I will do when I’m running in the path of an animal that could kill me.  I feel like I need a “how to deal with dangerous animals while running” class since it’s a bit different than hiking.  Everyone knows you shouldn’t run away from a bear, but what happens when you’re just trying to run?  Would it be annoying to run with bear bells on?

*BONUS THING I’M GOING TO MISS:  The Flyers!  Especially since even if I have the opportunity to watch a live game up there, it will be happening at 3:00 pm.  Holy time change.

Fighting in the penalty box!

So there you have it – my very silly list of things I’ll miss when I move.  If you live in Philly you might understand why I’ll miss some of these things (who else is a pretzel snob?).  Of course I’m giving this stuff up in order to have even better stuff in Alaska, but it doesn’t completely fix the fact that I won’t have a Chipotle burrito for a long time!  Why can’t I have it all?

Are you addicted to any of the things on my list?  What would you miss if you moved away from your hometown?

Happy #impactday to my fellow @keepnaturewild #wildkeepers! Every month I say I’m going to clean up a new spot, but every month I end up having to re-clean my neighborhood streets and park. A week ago the city cut down some of the brush along the road, exposing a ton of trash I couldn’t get to before. And because the road we walk to get to the playground is where everyone parks when they want to go to the playground or swim in Campbell Creek there was a ton of trash over there.
Earlier this year I met a bunch of moms who like to hike together with our kids. We recently decided to plan a moms only kayaking trip out of Seward. I haven’t sea kayaked in years and Seward is my favorite place on earth so I was 100% down for this adventure!
Fun fact: this picture was taken at 11:00 PM!
Today was Elliott’s yearly evaluation with early intervention and his PT. This is the evaluation that diagnosed him with severe gross motor delays last year and even though I thought it would be less stressful this year it really wasn’t. But right now I’m deciding to focus on the positives and that’s what you see in this picture right here: Elliott walking on his own two feet at the top of Crow Pass!
The first time I hiked up to the top of Crow Pass was 5 years ago. I remember thinking that this was a tough hike and I felt so accomplished after getting up there. I never could have imagined that one day I’d hike up there with my toddler and all our gear for two nights and get to camp in the Crow Pass Cabin! Doing this hike with Elliott made my heart so happy and I had a blast making new memories up there. My “backpack” is a lot heavier now than it was 5 years ago but it’s also a whole lot cuter!
When it’s crazy hot out and you’re exhausted from backpacking the best solution is a chill family lake day with some friends!
3 days. 2 nights. 8 miles round trip. 3 moms. 4 kids under 4. A billion mosquitos. Too many mountain goats to count. 50+ pounds on my shoulders. And so many amazing memories ❤️
Today as I was dancing around the house with Elliott and we were both screaming the lyrics to “Barbara Ann” at the top of our lungs I realized that at some point in my life doing silly stuff like this with him will be a distant memory and I almost cried. He’s turning 2 next month and clearly I’m not ready 😩
Our little family out for an evening stroll at Potter Marsh ❤️ Seriously nothing is better than watching this kid get stronger and more confident on his feet every day!
Bay views, the sound of waves putting us to sleep, and only two other groups around for miles? Yeah, this was the perfect campsite! Camping at Kayak Beach after our long day hiking Grace Ridge was the best way to end our adventure. It’s the most remote campsite I’ve ever had and it got me interested in exploring all the wild places in Kachemak Bay State Park!