Hey everyone!  I hope you enjoyed your weekend!  Mine was pretty great, mostly because I was lazy and did absolutely nothing all day on Saturday!  It felt so good after my busy week!  On Sunday I had another fun long run scheduled.  I’m tweaking Hal Higdon’s Novice 1 training plan a bit to fit my schedule and to give myself a taper before race day, so Sunday was an 8 mile day.  Lovely.  After last week’s hot mess run, I was extremely nervous about going out for this long run.  Seriously, I was SCARED.  I’d never run 8 miles before, and I wasn’t feeling so confident after what happened during last weekend’s 7 miler.  Plus, my thighs and butt were hurting from doing a little kickboxing workout on Saturday (probably not the best cross training idea), so I was trying every excuse in the book to get out of this thing.  But my husband ultimately got me when he said “If you skip this, are you going to be mad later?”  The answer was obviously yes, so I put on my running shoes (without YakTrax!  Yay!) and drove out to Forbidden Drive.  I made my husband come with me after what happened last weekend, so he went for a little hike while I ran. 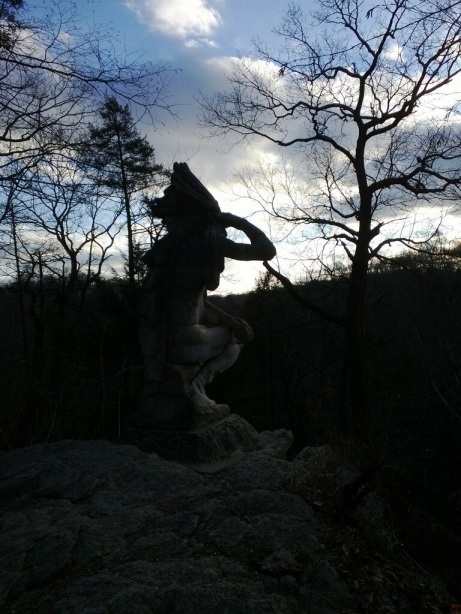 Andrew hiked to the statue of Chief Tedyuscung at the top of the gorge!  A brave hike in all that mud!

Some differences from last weekend’s run: 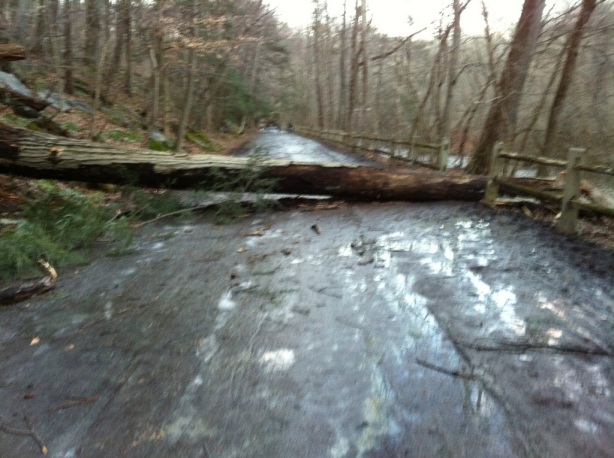 Right after I took this, some runner literally hurdled this thing like it was no big deal.  My legs couldn’t handle that.

I know that running is totally a mental game, so I wasn’t surprised when I started feeling tired only 3 miles into my run.  I was not doing a good job of thinking on the bright side and kept waiting for the moment when I hit the wall, but it never happened.  I had to stop to walk about 4 times to drink water, but I only stopped for about 10 seconds each time and had no problem starting up again.  Once I hit the turnaround spot, I felt so much better – just knowing that I was on my way back to the car cheered me up so much!  I finished in 1:40 with a 12:31 minute/mile pace, which is exactly what I hoped I would do!  I’m pretty sure it took me longer to do those 7 crazy miles last week!

So this is what I’ve learned this weekend:  it’s actually a good idea to scare yourself every once in a while.  Doing scary stuff is really hard, but it feels so good once you’ve gotten through it!  If you keep doing things that aren’t scary, you’ll never know how awesome it feels to work through tough stuff and come out on top.  If I had never signed up for the Disney Princess Half Marathon, I would have spent all day Sunday watching Netflix and would have never known how nice it felt to run 8 miles through the woods on a mild winter day.  And I have even more scary stuff planned for later this week, so stay tuned!

What’s the last scary thing that you’ve done?  Did you do a long run this weekend?  Tell me all about it!

17 thoughts on “Monday Motivation: Scare Yourself”