Hey everyone!  I hope you had a great weekend!  Mine was spent hanging out with old friends, celebrating my mother-in-law’s birthday, and running the Kris Kringle 5 Mile Run in Reading!  Quick look back:  I ran this race last December as well, and it was a very snowy and icy run!  I finished the race in 1:00:10 and was really happy because it was a distance PR for me.

This year I’ve been running faster and farther than in 2012, so I figured I could PR.  It’s the first repeat race I’ve ever done, so I was interested in seeing how much I could improve over a year’s time.  I was so excited to run this race until I woke up to rainy, 35 degree weather!  Plus Andrew and I overslept so I arrived at the race only 3 minutes before race time!  I didn’t have time to take my race hoodie back to the car, and it was freezing and pouring, so I made a last minute choice to wear it for the race.  And it was actually a surprisingly good choice!  By the time I started getting warm the cotton was soaked through with water and it actually kept me cool throughout the race.  I probably will invest in a waterproof running jacket for the future though since it was pretty uncomfortable at the end  🙂  It was really nice running on a race course that I was already familiar with because it helped the race pass by faster.  I also knew how many hills were in the race (a lot) and where they were (at the beginning, middle, and end) so I was able to mentally push through the tough parts.  Even though the race was super hilly and muddy, the views from the Union Canal Path were beautiful!  If you’re not afraid of hills I would definitely recommend this race.  Once I got to the fourth mile marker, we were back on paved roads and I was able to speed up without worrying about slipping on mud.  When I turned the final corner to the finish line I literally said “Oh my god” out loud because I had scored a major PR! 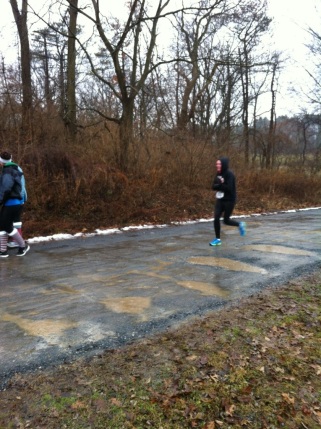 Notice the puddles, mud, and my ridiculous outfit

The official results aren’t out yet, but my Garmin results are 55:14 – almost 5 whole minutes faster than last year!  I actually smiled while crossing the finish line!  As soon as I was done I sped over to the agricultural center where the post race party was being held, took off my hoodie (it weighed like 5 pounds from all the water!), and chowed down on pizza and Godiva chocolate!  The Pagoda Pacers know how to throw a party!  After about 5 minutes I was shivering so bad that I knew I had to get out of my wet clothes asap.  Here’s some wet/cold race advice:  pack an extra set of clothes and a huge beach towel.  When you get back to your car, you can cover yourself with the towel and change out of your wet clothes in the car!  It was the best feeling ever when I took off those wet socks!

After seeing how much I’ve improved in only 1 year, I spent all day coming up with new running goals for next year.  I’ve got 2 half marathons to train for, plus I’m going to try to put my name in for the Broad Street Run lottery.  But I need to have more than just races to motivate me to keep running on days when I really don’t feel like doing anything at all.  So I’ve spent a few days checking out some awesome ways to keep my goals possible, and I’ve settled on the following fitness goals, courtesy of my fellow bloggers:

Part of me wants to keep the Runner’s World Run Streak going (I’m not ruling it out yet!), but I honestly need to do some cross training, yoga, and get in some rest days without worrying about squeezing in a quick mile each day.  I’ve gained a bit of weight since my wedding in June, and I’d like to lose at least 5 of those pounds to get back down to my happy weight.  Running every day hasn’t helped me lose any weight so cross training is going to be necessary!  I think that all 3 challenges I’ve signed up for will fit together perfectly and will just encourage me to run farther and workout longer.  Take that, Christmas cookies!

What are your goals for 2014?  Are you doing any challenges to keep yourself accountable?

28 thoughts on “Monday Motivation: You Can Never Have Too Many Goals”