Has anyone else noticed that there have been a ton of yoga-related posts on running blogs lately?  It seems like last week I saw a ton, including this awesome post over on Scoot A Doot about mixing running and yoga together.  If you’ve never thought about the combo, go read that blog post!  It instantly changed my mind on yoga and what it can do for me as a runner.  My sister got me into yoga a few years ago, but I was never really a fan of it – back then I was in grad school and working full time as a nanny, so taking 1 hour out of my life to shake while holding poses and sweat in pain was not my idea of useful time.  Plus I’m the least flexible person on earth and I’m not coordinated at all so graceful sports are not for me.  Now that I’m into running, I’m realizing that an hour to workout isn’t actually a big deal – especially when it helps me get more flexible and possibly prevent running injuries.  So on Monday night, I decided to pull out an old yoga DVD that I bought at Walmart a few years ago, dug out my hot pink yoga mat, and re-tried yoga.

My first thoughts were “This feels great!”.  Deep breathing and stretching is something that I need more of in my life because I never really get to relax or have “me” time other than running.  And then came downward facing dog.  OMG it hurt!  I could feel how tight my legs were from running and while I was glad I was stretching them out, it still hurt a lot.  Then came some crazy sequences, including a warrior sequence that literally was so painful and difficult on my legs that I started crying.  My husband thought I was insane, but I kept going and finished the 53 minute DVD.  After I finished, I couldn’t stop shaking and I felt really sick, although I wasn’t sweating as much as I thought I would.  But I did feel this very strange, floaty, blissful feeling that I later realized was just the feeling of being relaxed and calm – which are two things I have not been in a loooong time.  It was very different than how I feel after a run, but it was still a good feeling that stuck with me for a while!

Tuesday I woke up super early due to someone calling out at work, which caused me to spend literally 2 hours frantically trying to get every shift covered on the student schedule.  It was my last day of covering the schedule and I really wanted to get it done correctly.  Then I spent the rest of my day dealing with crazy phone calls and even more bizarre student work situations…but the craziest part was that I handled it all without crying or freaking out.  I felt way more calm about each situation than I usually would, and I think I can partially blame yoga!  Physically, my knees hurt when I woke up but that feeling went away after a few hours.  I’m now definitely sore on my abs and upper arms, so I know I was getting a good workout!  But I’m really glad that I gave it a try, even if I was really awful at it.  My new goal is to find a runner-friendly yoga routine and do it a few times a week for at least a month.  If after a month I’m still falling over mid-pose and feeling nauseous after working out I’ll stop.  But after seeing how relaxed I felt on Monday night and Tuesday morning, and feeling much more stretched out, I’m thinking that this is something that I should keep in my workout routine! 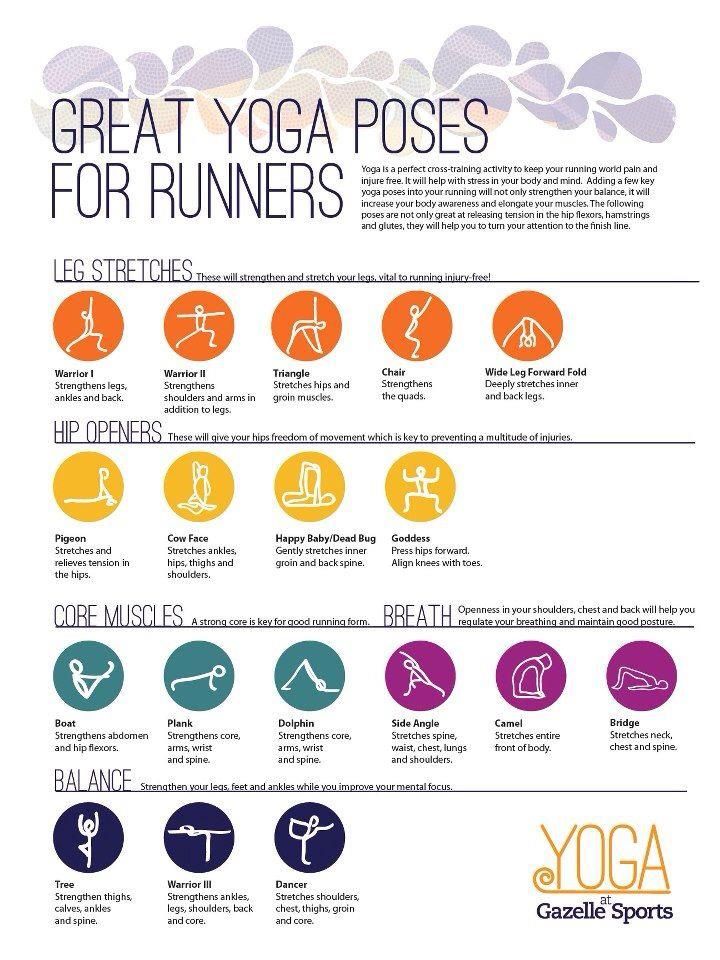 I found this on Pinterest and plan on doing some poses whenever I need to stretch out!

Since I have no idea what I’m doing, I’ve been asking for help from any yogi that is willing to share their wisdom!  I’ve already been given some yoga advice from Rebecca at Strength and Sunshine.  Her recent blog post about crying while doing yoga was really inspirational and I hope I can someday get to that point with yoga (and not because of pain). She gave me some links to yoga workouts that are great for runners so feel free to check these out!

Do you do yoga on your non-running days?  What routines do you use?  Share them with me!  And does anyone else fall over/look like a hot mess when doing yoga or is it just me?