Yesterday was the start of the 2nd annual Runner’s World Half Festival in Bethlehem, PA!  Yesterday morning was the 5k and 10k, and today is the half marathon.  There were also options to do the Five and Dime (5k and 10k) or the Hat Trick (all three races).  There were tons of running celebs there, including most of the staff of Runner’s World magazine and Olympic athlete Summer Sanders!

If you remember my posts from last week, my big worry for this race was my lack of training in the last few weeks.  I missed my long training runs in the last 2 weekends of training and didn’t run at all in Acadia, and all the runs I did last week were pretty terrible.  While I knew I could probably get through the 10k, I didn’t want to cause an injury, especially with all the races I have coming up.  So I was pretty nervous on the drive up there – especially when I got there and saw all the hills!  Even so, I had a few goals for the race:

3.  To not get injured.  I have another 10k on November 3rd and I need to keep up with my half marathon training, so I can’t really miss any more weeks of running.

The race was held at the ArtsQuest center, which is made up of old factory buildings and steel furnaces that have been renovated and are now used for events.  There were official RW Festival parking lots within walking distance of the race that cost $10 each, as well as 2 hour parking on the streets.  When we arrived at 8:30, the 5k was already underway.  There was no way to get to the registration building without somehow cutting through the 5k racers, and then there were no signs letting me know which building to go to for packet pickup, so by the time I got my packet I was pretty frazzled.  It was also still pretty chilly, so Andrew and I walked laps around the area to keep me warmed up.  One awesome perk of having the race here was the (heated!) indoor bathrooms and the line wasn’t even too long!  At about 9:15 I lined up for the race.  There were pace signs to help spread runners out, which I thought was a great idea and really helped with the flow of the race.  Summer Sanders was in charge of starting off the race, and at exactly 9:30 we were on our way!

The description of the 10k course online said that there were 2 significant hills at the beginning of the race, and that the runners who started out slow on the hills would have an easy time on the flat streets of Bethlehem in the second half.  Well, I’m actually not sure where those “2” hills were, because I counted multiple hills in the first half of this course!  The hills just kept coming and when I thought we might finally be at the top of Bethlehem we would turn a corner and go up another hill.  It kind of messed with me and kept me from pushing myself because with every hill I could feel myself getting more tired.  Luckily I train on hills and was able to get through it, but during mile 3 it got pretty tough.  Fortunately the second half of the race was either flat or downhill, except for one last hill at the end.  Here’s my breakdown of the race:

Mile 1:  The crowd actually thinned out faster than I expected, possibly because of the pace signs.  We ran past cheering fans and an accordion/harmonica player who was singing blues songs with his band, so we were all pretty pumped up.  College kids also came out of their houses to watch us go by.  I quickly found my pace and tried to take it easy on the hills.

Mile 2:  We ran down a hill, up a bridge to get over the river, and then ran up another hill.  There were lots of people cheering on the bridge, and the first of many race photographers.  There was also a DJ at the bottom of the big hill which definitely helped me power through it.  At the top of the hill, race volunteers were directing us to stay to the left so that the lead runners could get through (the only part of the race course that repeated itself was that hill and the bridge, and they were coming back through already).  The clock at mile 2 said 22 minutes, so the lead runners were going pretty fast!  Water stop #1 was at the end of mile 2.

Mile 3:  This was probably one of the most fun miles, but also came with a loooong hill and some shorter uphill sections.  We ran up a main street of Bethlehem, and lots of locals and business owners came outside to cheer us on.  There were some old ladies sitting in their front yards in lawn chairs, and a little girl with a sign that said “Weirdest parade ever”.  At the end of mile 3 was a church group who was giving out high fives and water.  I was surprised to discover that I had run it in 32 minutes and wasn’t feeling any pain or significant tiredness.  I realized for the first time that a PR might actually be possible!

Mile 4:  Very flat and quiet compared to the other miles.  I was less distracted, which led me to occasionally let negative thoughts creep in. I started feeling nauseous and tired.

Mile 5:  Started off with a long downhill stretch to the bridge, then we ran across the same bridge as before.  The DJ was still playing music and there were a few more photographers here.  The girls in front of me were cheering and hamming it up, so I made sure to smile and not look half dead.  There were more people cheering us on at this point and I knew we were so close to finishing.

Mile 6:  It started right by the accordion/harmonica man from earlier and had a water station.  Then instead of going straight to the ArtsQuest center we took a long route around to the finish line. I started running faster and felt really nauseous, especially when I started smelling all the food at the finish line.  We had to run up one last hill which I could tell was tough for everyone around me.  I passed a few people who looked like they were going to die.  Then the final stretch was downhill.

The last 0.2:  Flat and fast!  There were lots of people cheering, which helped me keep going even though I really felt like stopping and throwing up.  I’m working on pushing myself harder at the end, but it just wasn’t in me for this race.  We ran under a metal arch that was on fire and then through the finish line.   At the finish line there was an announcer pumping up the crowd and calling out the names of the finishers as they came through.  When he said my name I started cheering and ran through the finish line with my hands up!  I grabbed my medal and all of the post race food (water, banana, bagel, and free samples from Belvita and Larabar).  Andrew was following me down the sidelines cheering and screaming “YOU PRed!”.  He gave me the biggest hug and then even before I had any food or water I asked him to scan my bib to get my race results.  My official chip time was 1:06:30!!!!  A 2 minute PR!

After eating a bagel and drinking an entire bottle of water I stopped feeling nauseous and was able to enjoy the post race festivities.  I ran into my little from my sorority who had run the Five and Dime (9.3 miles!).  Then I went to the expo to get my shirt and to check out some of the vendors.  I also posed to get my picture on a souvenir cover of Runner’s World magazine, which was really cool!  I didn’t meet any celebs but Andrew kept talking about Bart Yasso and Summer Sanders and all the stuff they were doing while I was running (she finished in about 45 minutes, so she’s pretty fast!).  I eventually started crashing so we went to Cici’s Pizza Buffet, where I ate pizza until I felt better.  And then I crashed for the rest of the day.

Overall the race was lots of fun and very well run.  I would 100% recommend this race to anyone who lives in eastern PA!  Although there were lots of hills there were a lot of people cheering us on through the tough sections which helped a lot.  There was a lot of different types of post race food and festivities and I loved the medal and moisture wicking shirt!  I will definitely be running this next year, and may even try to go for the half!  Thank you so much to the staff and volunteers of Runner’s World!  And thank you to the awesome people of Bethlehem who kept cheering us on during all those hills!

Celebrating in front of the ArtsQuest Center steel stacks!  Bethlehem was awesome!

And if you’re wondering how injured I am right now…I’m still waiting for the results on that one.  I’ll be running 3 miles tomorrow so I’ll see if anything hurts.  So far I just feel sore but I’m able to walk with no issues.  This race might have been a running miracle! 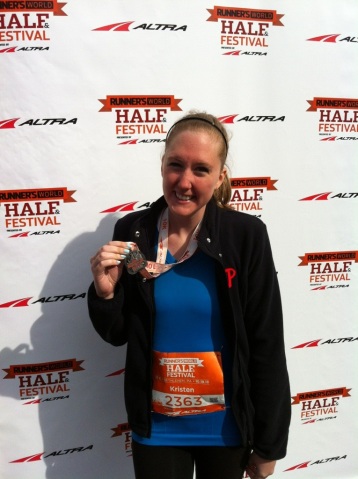 Have you ever run a 10k?  What about a Five and Dime, or another back to back race?