Today was another lovely fall day in Philly.  I met Andrew at the park right after work for a run so that he could get home in time for the Eagles game.  He always asks me how far I’ll try to run, and today I said “3 miles” without even pausing to think about it.  My goal this week is to do over 10, so I’ve got to start the week off right!  I was feeling awesome throughout the run and just let my body dictate how fast to go without listening to the annoying negative voice in my head.  After the first mile, I was kind of shocked how fast I was going but I didn’t want to slow down.  Mile 2 was filled with hills, but I was still making good time.  Once I got to 2.5, I realized that I was going to break 30 minutes!  I haven’t done that since April, and even then I’d only done it a few times.  I was so excited that I literally flew the last half mile.  I had to take a picture for proof that this actually happened! 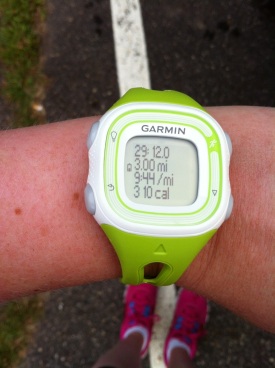 I also set a new record for my mile time  at 8:58!  I broke 9 minutes!  I seriously was jumping up and down with my arms in the air, I think my husband thought I was crazy!  It’s amazing how one fantastic run can make you feel so much better.  This gives me hope that I’ll break 30 minutes in my next 5k, which has been my goal for a year now!

Setting these new milestones is getting me really excited for fall racing season.  I love fall weather, so I filled my calendar up with as many fun races as I could.  I’ve also decided to actually go after my goal of running a race in all 50 states!

I’m also definitely doing a Thanksgiving Day race – probably the Toss Your Turkey 5k in Pottstown, PA.  I did that one last year and it made eating all that pumpkin pie soooo much more rewarding.  I’m also possibly thinking about running a race while I’m in Maine over Columbus Day weekend, but I don’t want to get too crazy.  But it would be nice to knock out a few more states on my list!  And I need some more chances in there to break my 30 minute goal time!

Do you have any races lined up for the fall?  Are there any cool races in the eastern US that I need to run ASAP?

9 thoughts on “Looking Ahead to Fall Races (and a sweet PR!)”

Happy Alaska Day! Today we took a moment to think about how lucky we are to live in this wild and gorgeous state that we love. Making the choice to move here over 7 years ago was definitely the best thing we’ve ever done! But living here isn’t always easy.
Anne of Green Gables said it best: “I’m so glad I live in a world where there are Octobers” 😍
Elliott’s current obsession on every hike, stroller walk, or playground visit is to “pick leaves”. He likes to find the best leaf from the ground and carry it around for a while examining every inch of it until it’s time to pick a new one. He tells me all about what he sees: the color, if it’s big or small, and if it has “sprinkles” (AKA polka dots). It’s my new favorite game of his and I’m not excited about the fact that this game is going to be over soon!
High fiving Elliott because today we hiked a new portion of the Turnagain Arm Trail, found some peak fall leaves, and climbed to these epic views. Oh and also because we got through our first bear encounter together!
Today was a perfect hike with one of my favorite people @ashleyinak! We hiked out to Echo Bend, drank backcountry PSLs and ate pumpkin bread on the banks of Eagle River, chatted for hours, and soaked up the last of fall. I’m still not ready to let fall go but it looks like the leaves have already started to say goodbye 😢
Fall has always been my favorite season, but celebrating it with a kid makes it a million times better! I’ve always loved the changing leaves but watching Elliott get excited about the bright colors and the leaves falling around us makes my basic mommy heart so happy. The yellow may be fading and the leaves are falling but we’re still trying to enjoy every little bit of fall that we can!
I’m super excited to announce that I am one of the newest members of @cotopaxi’s Advocate Team! I bought my first Cotopaxi jacket a few years ago because of its super bright and fun mint green color, but I also loved their motto “Do good” and what they stand for. They are a B Corp, put 1% of their profits towards addressing poverty and supporting community development, and their gear is made using product remnants that would otherwise be thrown away. Plus who doesn’t love wearing fun colorful gear?
Yes, I hiked Twin Peaks last Monday. But I went back today because the leaves are still perfect and I can’t get enough 😍
Today the whole family went to @reindeer_farm_ak for their fall family fun event! Even though I checked the forecast and it was supposed to be a normal cloudy fall day it ended up snowing 🤦‍♀️ Despite the fact that Alaska tried to turn this into a winter event we had a lot of fun! Elliott loved picking his favorite pumpkin from the patch, petting the reindeer, and seeing all the tractors and farm equipment.
The last two days I’ve taken a mid-adventure break to hang out next to a lake and let Elliott do whatever he wants and it has been so much fun. Elliott has been obsessed with “skipping rocks” just like dad and it’s absolutely adorable seeing him get so excited about making a big splash. I love watching this kid grow up and learn new things!